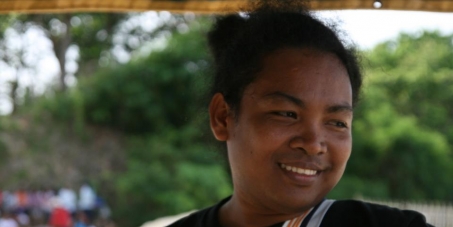 By continuing you agree to receive Avaaz emails. Our Privacy Policy will protect your data and explains how it can be used. You can unsubscribe at any time. If you are under 13 years of age in the USA or under 16 in the rest of the world, please get consent from a parent or guardian before proceeding.
This petition has been created by Qiqo S. and may not represent the views of the Avaaz community.
x


In the Philippines, On February 22, 2013, at about 9.50 pm, Dexter Condez, 26 year old leader and spokesperson of the Ati tribe in Boracay, was gunned down by an unidentified man wearing a jacket and cap as he was headed home with two other companions. They had just come from a meeting with the nuns of the Holy Rosary Parish Ati Mission (HRPAM). Investigators found at least six bullet casings of a still unknown gun caliber near the crime scene.

Dexter Condez belongs to the Boracay Ati Tribal Organization (BATO), whose members have been fighting for a land of their own on the 1,032-hectare Boracay Island, a globally popular tourist destination, which they consider their ancestral domain. The Ati tribe members and its supporters including the influential Catholic Church, linked the killing of Dexter, “Dex” to many of his friends and comrades, to the dispute over the 2.1 hectares of land being occupied by the Ati and covered by a certificate of ancestral domain title (CADT) granted by the National Commission on Indigenous Peoples (NCIP) on January 21, 2011.

Join us as we cry JUSTICE for Dexter and the Ati. Please sign on the online petition urging the Philippine President Benigno Aquino III to call for an immediate and thorough investigation to identify the perpetrator and masterminds.

Famous for its powdery, white sand beaches and must-experience night life, the island of Boracay lies at the western tip of Panay island, in Central Philippines, with a total land area of 1,038.82 hectares. It is inhabited by approximately 16,000 local people spread in three villages (villages of Yapak in the north, Balabag in the middle portion, and Manoc-manoc in the south).

However, before tourism came to Boracay, the Ati (Negritos) have long been living in the island. The National Commission on Indigenous Peoples (NCIP) and anthropological studies have supported claims that the Ati were the earliest settlers on the island but were displaced and driven away, especially starting in the 1970s when tourists and investors started to descend on the island.

The creation of Indigenous People’s Rights Act (IPRA) in 1997, which protects the Ati from the threat of eviction, unfortunately, does not give them a sense of security because powerful people have laid claims to the land where they settled and with continued construction of permanent buildings since the 1970s.

After years of struggles to reclaim their ancestral lands, rights and dignity, in August 2010, the NCIP finally issued the Certificate of Ancestral Domain Title (CADT) to the Boracay Ati through their organization, Boracay Ati Tribe Organization. At 2.1 hectares of land, this could very well be the smallest ancestral lands awarded to any indigenous group in the Philippines. But almost two years later, most of the 200 Ati have still not been able to settle on their land for fear of harassment and eviction from three other claimants to their lands.
On April 17, 2012, at around 5:00 in the morning, hundreds of Ati tribe members peacefully and successfully occupied the 2.1 hectare of land promised to them by the NCIP. The Ati fenced the surrounding vicinity of the land and placed markings on it indicating that the area is their ancestral lands.

On November 2012, at least 20 security guards employed by J. King and Sons Co. Inc armed with shotguns and hand guns, were sent to the occupied land of the Ati community to destroy parts of a perimeter fence put up by the tribe. No one was hurt but the incident left the Ati terrified. Dexter Condez, the youth leader and spokesperson of the Ati tribe community, was among the tribal leaders who were involved in a confrontation with the security guards.

The J. King and Sons Co. Inc. is one of the three claimants of the Ati’s lands. It operates three hotels on the 1,038-hectare Boracay Island, including the Crown Regency Resort and Convention Center.

For the Ati tribe, the killing of Dexter Condez was a clear and shameful act of intimidation and violence against them. They are strongly condemning this brutal killing.

They are urging President Benigno Aquino III to call for an immediate and thorough investigation to identify the perpetrator and masterminds. Specifically, the Ati tribe and their supporters, also demand the Philippine National Police to effect an arrest.

Today: Qiqo S. is counting on you