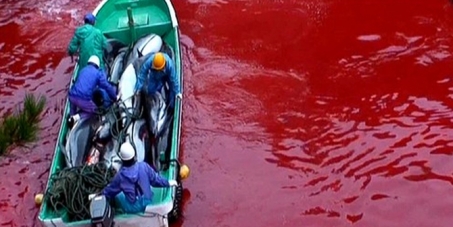 By continuing you agree to receive Avaaz emails. Our Privacy Policy will protect your data and explains how it can be used. You can unsubscribe at any time.
This petition has been created by Jignesh D. and may not represent the views of the Avaaz community.

Every year in Taiji Japan a Dolphin Massacre commences on September 1st. This continues for 6 months. There are two organizations that have sat back and done NOTHING to stop the endless bloodshed during the hostage taking that supports the aquarium industry. WAZA (World Association of Zoo and Aquariums)and IMATA (International Marine Animals Trainers Associations). By doing so, both organizations support the slaughter of dolphins in Taiji.

IMATA have been seen there wearing their very distinguishable caps selecting and buying dolphins as live captives for entertainment purpose for places like Sea World, Marine Aquarium etc. around the world. IMATA trainers also pick the "good looking" dolphins for captivity and have been seen laughing alongside dolphin killers as dolphins get slaughtered. These captive dolphins live in horrible conditions for rest of their life in a bathtub size tanks and are tortured by IMATA trainers to perform the tricks for some “dead fish” ' they starve them and force them to do the tricks.

The goal of WAZA (the World Association of Zoos and Aquariums) is to guide, encourage and support the zoos, aquariums and like-minded organizations of the world in animal care and welfare, environmental education and global conservation. Nothing is further from that mission than the inhumane methods used in the Taiji Drive Hunt. JAZA (Japanese Association of ZOOS and Aquariums) is a member of WAZA and WAZA continues to ACCEPT them in their membership and this although JAZA's Taiji Whale Museum is acting against WAZA' Code of Ethics... The messy agreement they made with the fishermen`s union allows bottlenose dolphins to be captured for slavery during the month of September.

Life and death for these dolphins is dictated by one Dr. Gerald Dick, Executive Director of the World Association of Zoos and Aquariums (WAZA). Dr. Dick has the power to abolish the violent captures that in turn would likely end the slaughter.

WAZA plays a vital role in the Dolphin massacre happening there every year in Taiji, Japan by supporting the slaughter of dolphins in Taiji which is fueled by the captive industry this will continue unless we stop it. Please sign, share and tweet and DEMAND that WAZA DOES NOT support this brutal Taiji Dolphin hunt.

Today: Jignesh D. is counting on you