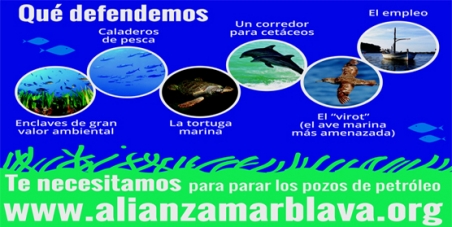 Oil prospecting seriously threatens the environment and the economy of the Balearic Islands, Valencia, and Catalonia, in the western Mediterranean.


Ask the Spanish environment minister Arias Cañete to listen to the strong social, business and government opposition to the Cairn Energy's oil prospecting project in Gulf of Valencia waters, between Ibiza and Formentera and the Valencia coast and to issue a negative Environmental Impact Declaration from the Spanish Ministry of Environment (MAGRAMA), thus halting the project. The public participation procedure of the Environmental Impact Assessment of the first stage of Cairn Energy's oil prospecting project in Gulf of Valencia waters, between Ibiza and Formentera and the Valencia coast is currently open for public comment. The project being assessed is called “Campaña de Adquisición Sísmica 3D en los permisos B, G, AM-1 y AM-2 en el Golfo de Valencia” , and is promoted by Cairn Energy via its Spanish subsidiary Capricorn Spain Limited. The aim of the “campaña de adquisición sísmica” , or acoustic survey, is to map the seabed to reveal the potential existence of geological formations likely to contain hydrocarbons. Exploratory drilling would then follow. Should sufficient oil deposits be located in the area, commercial drilling would begin. In order to obtain the necessary information for this map, powerful air guns are used to generate sound waves of an extremely high acoustic level which can penetrate up to 7,000 meters deep into the seabed. The noise emitted is some 10.000 to 100.000 times louder than a jet engine. The blasts are triggered almost constantly 24 hours a day, 7 days a week, during a period which lasts for almost three months.There is wide scientific consensus that these sound waves cause serious physical injuries to marine fauna: fish, sea-turtles, cetaceans, and have negative effects on their behaviour and their capacity to survive, and may lead not only to physiological harm but even to death. Fish catches also drop significantly for long periods of time. The environmental impact of the project is critical. Alianza Mar Blava , a cross-sector alliance with more than 50 members of public, private and social institutions, representing the full range of social and economic actors in the Pitiusas islands, is very grateful for your valuable support. More information available in: http://alianzamarblava.org/es/

Carlos B. necesita tu ayuda con "Don't sacrifice the environment and the economy of the Mediterranean and the Balearic Islands in the search for oil". Únete hoy a Carlos B. y a 1,868 firmantes