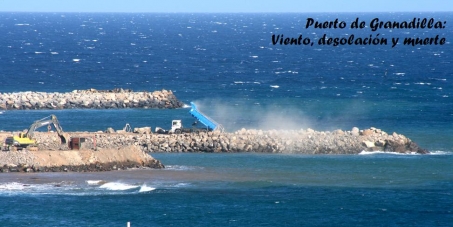 Honourable Members of the European Parliament

Dignitary European Deputy and distinguished European Authorities: I remit this new writ to you, written after the clarifying writ I remitted a few days ago, relating to the matter above mentioned. I would also like to mention a parliamentary question made to this matter on the 19th of June 2013 and its answer by the Commission on the 12th of this month of August. Almost two months later.

It is said that the Commission received on April 2009 a financial claim for the project of “Puerto de Granadilla” for 67 millions of Euros, out of which amount; 14 millions have been certified to the date. It also says that the Commission examined this claim in detail and asked for additional information, adding that the Spanish Authorities consider that this infrastructure is vital for the island of Tenerife.

The answer of the Commission is that the project of “Puerto de Granadilla” has NO YET been object to any decision taken by the Commission.

Mr. Eurodeputy, I promise you that the “Puerto de Granadilla” IS NOT vital for Tenerife or Spain. What has been defined as “a great project” is not more than a big LIE, a great UNDEVELOPED STATE in ecological terms, and a great WASTE OF PUBLIC FUNDS. This port, due to the unfavorable weather conditions that affect its environment, will never work in a minimal acceptable way. It would be a ruin in all terms and will NOT suppose any productive economy nor job placements. There is a similitude in the island of Gran Canaria, The Arinaga port, which was also financed by the European Commission and is now out of function, even though the conditions there are more favorable.

In case the goal of this “Puerto de Granadilla” was unloading Liquid Natural Gas, the danger would be highly risky, due to the violent and continuous winds and the proximity two town areas, at less than two kilometers. South Airport is also near, at six kilometers, as well as considerable touristic resorts, first and practically the only industry that remains in the island.

I plead you read the Expert Report about winds and its consequences on the different types of ships (x). I make reference to its link, as well as those that appear on AVAAZ campaign. This report is absolutely faithful to the reality. I promise you again, as Officer of the Spanish Merchant Navy that this is the actual situation. DO NOT ALLOW that Europe wastes this important amount of money. There are too many unattended needs in first instance in all the European Union countries, due to low incomes. ¡Justice now!