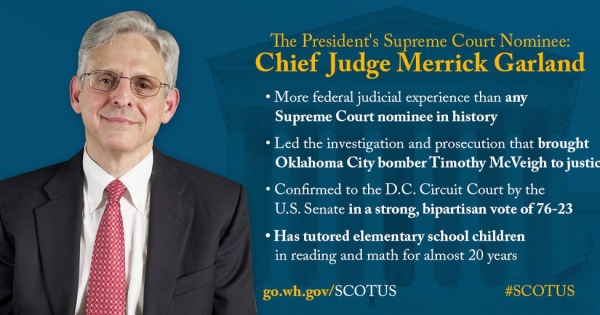 To the american Senate&colon; give Judge Garland a fair hearing

Signer cette pétition
Marie R.
a lancé une pétition à destination de
Le Sénat américain
On March 16th, 2016, Barack Obama nominated Judge Merrick Garland to fill the vacancy at the Supreme Court of the United States, following the death of Antonin Scalia. Ever since, leaders of the american Senate have refused to give him a fair audition or vote on the matter, arguing that they would wait until a new president was elected. There is no reason to wait! Barack Obama was, and is still, fully president, and it is his right and duty as a president to nominate the judges to the Supreme Court. Just like it is the duty of the Senate to audition them and approve (or not) the choice made by the president. It will soon be nine months since Judge Garland's nomination, and there is no valuable reason for this waiting. Let's tell the Senate that the world is watching, and that the world supports the respect of the american Constitution.