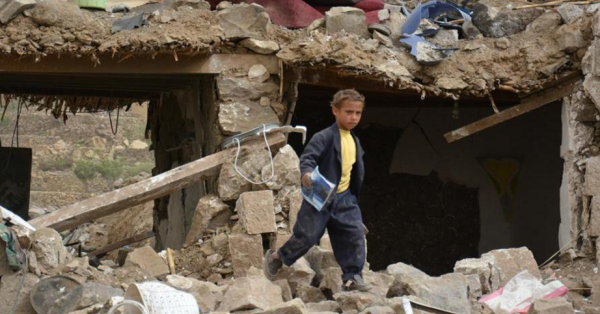 The States in the Security Council of the United Nations: Stop the bombing of Yemen

Stop
the hostilities in Yemen !


The
Yemeni people are dying from lack of care and food !

We
call on the
States in the Security Council of the United
Nations to act to:

-
Stop all fighting and specially air strikes against Yemen,
-
Lift the air, land and naval blockades,
-
Supply critically needed humanitarian aid, and
-
Bring all parties to the negotiating table.

From
the end of March, 2015 until now, Yemen has been under a blockade.
The country’s infrastructure (airports, roads, bridges) have been
destroyed by two months of continuous bombing by a military coalition
led by Saudi Arabia. Yemen is the poorest country in the Middle East
and as 90% of the country’s food is imported, the air, land and
naval blockade has caused a severe shortage of food, medicine and
fuel. Due to the lack of medicine and fuel, hospitals cannot operate
properly. The rare food stocks available cannot be distributed around
the country due to damage to the main roads and airports. Clean water
is no longer available for most of the Yemenis. According to UN and
NGO experts, the humanitarian crisis in the country threatens the
lives of more than 10 millions children, women and men in Yemen.

Dominique
Burgeon, an FAO expert, said that “between 14 and 15 million people
are now food insecure or, of a total of 26 million people in Yemen,
half of them severely insecure”. He added that “trade and
importation should restart.”

Stopping
the war and providing assistance to Yemeni citizens is urgently
needed in order to avoid an unprecedented humanitarian disaster. The
silence of the international community in the face of such a
catastrophe must be broken. A large mobilization of international
support is needed for the survival of the Yemeni people.

It
is a social and humanitarian initiative, without any political or
religious links, aiming to bring back security, stability and a
lasting peace for all Yemeni citizens. Its members belong to various
nationalities, all over the world. Their contribution is voluntary.

We
ask for your support and for your participation to our action : join
us on Facebook and Twitter.