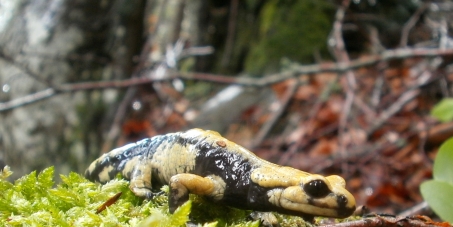 Save the golden Alpine salamander!

The Natura 2000 site "Altopiano dei Sette Comuni" is of major importance for the protection and conservation of existing populations of S. a. aurorae as it includes the area of the type locality of this taxon, the “Bosco del Dosso” forest. Until today, the population at the Bosco del Dosso is supposed to represent the largest known census size population of S. a. aurorae. Despite the enormous importance of this population, in May 2012 destructive forestry works as well as forestry clearings have been noticed at the Bosco del Dosso (Figure 2). Additionally, marked trees for later clearences were also observed (Figure 3). In detail, new forestry paths and roads were built by using heavy machines and a large number of trees, particularly Silver Firs ( Abies alba), have been marked to be cut in the near future. In the recent past, the use of heavy machines for wood harvesting, both in this and other similar areas, have had disastrous consequences including direct killing of salamanders, intense soil compacting, destruction of the forest understory and of small forest elements (e.g. logs) that are frequently used by salamanders as shelters during their activity period. Intended logging will have dramatic negative consequences for the habitat of the salamanders as the microclimate will change, soil temperature will increase and humidity of the soil will decrease. All in all, these effects will make the current environment of these salamanders unsuitable and it is very likely that this population will go extinct as a consequence of already performed and planned logging measures. Similar activities and heavy forestry exploitation are also currently ongoing at a second locality where the golden salamander occurs, the “Altopiano di Vezzena” highland.

The spontaneous protest of herpetologists and some politicians have temporarily stopped the forestry activities in the Bosco del Dosso. However, the threat for salamanders at the Bosco del Dosso is far from being banned and a new plan for the exploitation of the forest is going to be approved by local authorities in the course of the next months. In our view, minimizing the impacts of wood harvesting in the area of the Bosco del Dosso and other sites where the golden Alpine Salamander is found is a must for the future survival and conservation of this endemic salamander species. For this reason, the Societas Europaea Herpetologica (SHE), the Societas Herpetologica Italica (SHI), the International Society for the Study and Conservation of the Amphibians (ISSCA) and the IUCN Amphibian Specialist Group (IUCN ASG) have placed an open petition for the conservation of the golden Alpine salamander and its habitat in the face of this dramatic threat. We demand:

- Any plans for forestry management and exploitation should be developed urgently for all areas inhabited by S. atra aurorae (between Altopiano di Vezzena in Trento Province and the part of Altopiano dei Sette Comuni under Asiago and Gallio municipalities) in close cooperation with expert herpetologists, that should be recruited from the above mentioned societies, to avoid any negative impact on these salamander populations