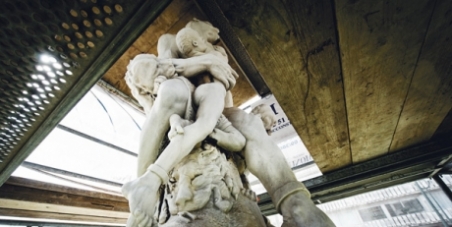 Deze petitie ondertekenen
seckou O.
heeft deze petitie aangemaakt voor
Joke Schauvliege, minister of Culture: kabinet.schauvliege@vlaanderen.be
There are countless statues and signs in Belgium wherein People of Color, especially Congolese people are depicted as inferior. These stem from a very agressive, dark colonial time we would like to overcome as a community. But when policy and established powers refuse to acknowledge these signs and refuse to listen to the people we should ask ourselves why. Do they really want to protect an outdated "culture" at the expense of a community? We are not just campaigning to remove the statue where a religious man puts his knee on a crouched black man but also against statues like "n****rslaves surprised by dogs" where you see a man protecting his child being while being torn apart by dogs. We want to be proud of "our culture" and for that these signs need to be put in their proper #context. Somewhere in a museum not in public.
You can help by sending a mail to our minister of Culture, Joke Schauvliege and by liking our page https://www.facebook.com/pages/Context/456526891147925
You can contribute by taking a picture with a statue like this in your neighbourhood with a textballoon or explanation why this is wrong and posting it under #decolonizebelgium