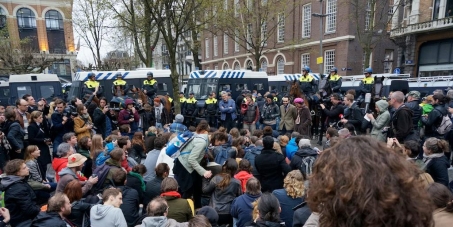 University of Amsterdam, Board of Directors (CvB), Resign! Restore democracy at the UvA!

Deze petitie ondertekenen
S C.
heeft deze petitie aangemaakt voor
University of Amsterdam, Board of Directors (CvB) - president: L. Gunning
On 11th April the Amsterdam Police brutally evicted the occupants of the Maagdenhuis, the central administration building of the University of Amsterdam. Students have been occupying it since February in protest against the undemocratic character of the university management, ruthless austerity and financialization of higher education in the Netherlands. The students initiated this occupation, but they were very soon supported by the staff and a large section of the public opinion, including trades unions and some dutch MEPs. They organized an "open" occupation, with lectures, public discussions, democratic assemblies on how to proceed etc. Nobody has ever been prevented from entering the building. They even held regular "cleaning sessions" to keep the building tidy.
Activists and academics from all over the world showed their solidarity: David Harvey, John Galtung, Judith Butler, Saskia Sassen, Noam Chomsky... Some of them visited the Maagdenhuis, gave public lectures and joined open discussions, such as David Graeber, Ewald Engelen and Jacques Rancière.

Although the students' demands were hardly met by the Board, they agreed to leave the Maagdenhuis on Monday April 13, as they would continue their struggle for democracy with other means. This weekend the students wanted to conclude the occupation with a "Festival of Science and Humanities."
However, the Board decided to take legal action against students and staff, having them evicted by the police, while they knew the Maagdenhuis would have been vacated two days later.

This escalation is a disgrace. The disruption of a peaceful academic festival is an unacceptable show of power from the CvB. The small amount of trust that was painstakingly rebuilt over the past weeks has now again been completely crushed. We consider the unnecessary escalation and excessive escalation of force the CvB's responsibility.

The University of Amsterdam Board of Directors and especially its president Louise Gunning have lost any remaining legitimacy. They should resign, stop prosecuting their students and staff and organize elections for a new Board that will carry out democratic reforms.
Dit als ongepast melden
Er is een fout opgetreden bij het uploaden van jouw bestanden en/of verslag.
Onjuist Ongepaste taal Haatdragende taal Illegaal Advertentie/spam Beledigend
×