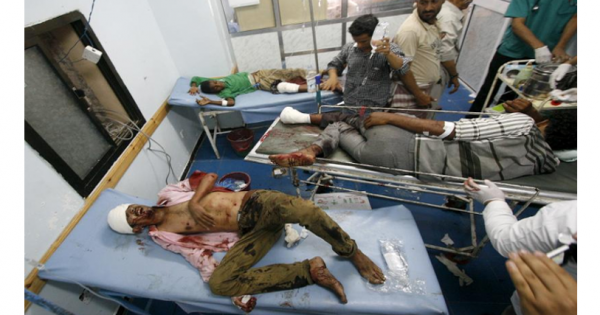 Signer cette pétition
Odile C.
a lancé une pétition à destination de
European, American, Saudi Ministries of Foreign Affairs:
Three months of conflict and bombardments in Yemen have caused a huge crises in food, health and sanitary conditions. According to Doctors Without Borders, it is the worst ever seen. The Red Cross is collecting corpses in the streets.

Children, women and men are killed daily or injured as a result of the on-going bombardments. Hospitals, houses and schools have been destroyed.
Over a million people have been displaced.
The total blockade -air, land and sea- is prohibiting international organizations from providing any humanitarian assistance.
Hospitals have run out of medicine to attend to the wounded and sick.
There is no electricity for days and at times for weeks.
Water is scarce.
An epidemic of dengue disease has begun.
Corpses are scattered on the streets.

We need your help to put pressure on the governments.

Please sign this petition to end the bombardments and fighting.

This petition will be delivered to the European, American and Saudi Ministries of Foreign Affairs.

-> "Satellite Images of Yemen indicate level of destruction and implication for recovery" :
http://nationalyemen.com/2015/06/29/satellite-images-of-yemen-indicate-level-of-destruction-and-implication-for-recovery

-> "Yemen : The world’s newest humanitarian catastrophe, and how Britain helped to create it" :
http://www.middleeasteye.net/columns/yemen-world-s-newest-humanitarian-catastrophe-and-how-britain-helped-create-it-759527421