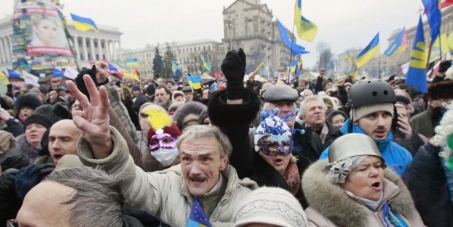 BEFORE THE NEXT GENERAL ELECTIONS ON OCTOBER

FOR BECOMING EU MEMBER STATE, IN ORDER TO

CONSENT UKRAINE TO CHOOSE WHICH EUROPE (THE PART

WHO WILL) TO JOIN, NOT TO FOLLOW A YET LOST

INTEGRITY OF THE STATE, BUT TO PREFER A CIVIL

SECESSION IN ORDER TO
AVOID A CIVIL WAR!

The first and last edition of this petition had supported the

Hope of the heroic pacific demonstration in Kiev’s Maidan

The undeniable success of this second civil unrest (after the

so-called Orange Revolution) were in front of us: suspended out

of borders the President Viktor Yanukovych, whose majority had

written some illiberal laws like limitation to pacific public

EU intervention, instead necessary not for inner democracy

but for exterior appeasement.

The problem now is the exasperation of the Eastern part of

the country, that years of government by the Party of Region had

irreparably divided from the Western part of that we rightly follow

to call Ukraine. It is unimportant that the party of the ex-President

isn’t on power, because the East’s regions and Crimea gave

clear signs of popular will to federate with Russia, after a

decade in which the Party of Regions had permanently devided the

Before the next general elections on 25th May (the same

date of the EU Parliamentary elections!) the duties of

experienced chef of diplomacy in Syria) and Štefan Füle (otherwise

2) to avoid every escalation with consequences to not only

our import of gas but also our tourism from Russian

Federation, which refuses the borders of Budapest

Memorandum in 1994, because Crimea was given to Ukraine

3) and not to follow a yet lost integrity of the State, but to

Now, the priority of the new High Representative for Foreign

Affairs and Security Policy Federica Mogherini and the next

Commissioner for the Enlargment and European Neighbourhood


to allow the Ukrainians electing their Verkhovna Rada to really