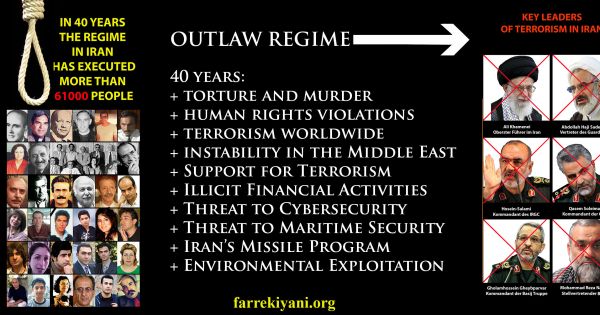 Petition unterzeichnen
Babak S.
hat diese Petition erstellt, an folgende Zielperson/Zielgruppe:
EU Parliament EU parliamentarian,EU commission,politician in europe,political parties EU
This is a petition seeking to appropriately and urgently classify the Iranian Revolutionary Guard Corp as a terrorist organization. For more than 40 years, with the help of the long arm and iron fist of its Revolutionary Guard and supporting Basij Militia, the Islamic regime has, in the name of God and/or the preservation of Islam, been, and continues to be guilty of:
For four decades, the Iranian people have been struggling to achieve their need of living in a democracy; to be represented by a government that prioritizes their basic needs for living with dignity. And for four decades, and with the help of its entire state apparatus including the Revolutionary Guard and Basij Militia, the attempts of the Iranian people to realize this need have been stunted, sabotaged and suppressed by the Iranian Islamic Regime – the enemy of democracy and human rights.   The struggle of the Iranian people should not go ignored and their needs for the very foundations and cornerstones of a peaceful nation should not go unanswered by the European Union.   The time has come for the EU to recognize 40 years of the totalitarian terrorist rule of the Islamic Regime in Iran, and act accordingly. The time has come for the European Union to end all economic and political relationships with, and entirely boycott the government of the Islamic so-called Republic of Iran, if it is to be held by its own standards and accords of ethics, morals, and Human Rights.   The people of Iran need your courage and support by standing with them in Solidarity. Help bringing Peace and Freedom to Iran, and subsequently, to the Middle East as a whole. Stand by the Iranian People.
Farre Kiyani Movement
www.farrekiyani.org/en