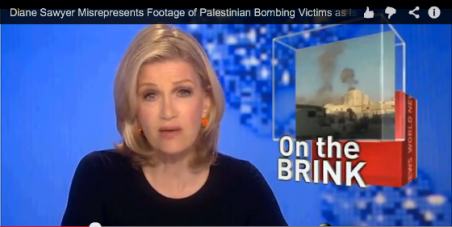 ABC World News: Apologize for lying about devastation in Gaza

This was preceded by a report noting that no Israelis have been killed, and that there have been 90 Palestinians in Gaza killed by Israel. It clarified that unlike Israelis, Gazans have no air raid sirens or shelters. The report also questioned whether Israel's response has been "proportionate."

Tonight's report was markedly different from ABC's previous reporting, showing the power we have to hold major news media accountable with grassroots action. It also reflects the sea change in the United States on the issue of Palestine, as the Boycott Divestment & Sanctions (BDS) movement has picked up key victories and entered into the mainstream.

Thank you for helping to hold ABC accountable. We must continue to challenge media distortions that legitimize Israel's violence against Palestinians.

In a recent report, ABC News falsely described images of devastation from the Gaza Strip as being in Israel. Footage of smoke plumes from Israeli bombs were shown while Diane Sawyer talked about "rockets raining on Israel," and an image of Palestinians in the rubble of a destroyed home was described as "an Israeli family salvaging what they can." (More information: http://electronicintifada.net/blogs/rania-khalek/abc-news-tells-viewers-scenes-destruction-gaza-are-israel by Rania Khalek)

With Israel having effectively made Gaza into an open-air prison, there's nowhere for the people of densely-populated Gaza to run. Israel justifies this violence by pointing to homemade rockets fired on Israel by Hamas. In this context, ABC has falsely portrayed Palestinian suffering as Israeli, fitting the narrative Israel uses to justify its violence against a defenseless population.

Viewers trust ABC as a reliable news source, and many will believe ABC's distortions, shielding $3.1 billion in yearly US aid to Israel from public anger. ABC must apologize thoroughly and unequivocally, on-air, to clear up the hateful misinformation it has so irresponsibly spread.

If we successfully pressure ABC to apologize, it will send a message to major news media that they can no longer get away with lying about Israel's occupation of Palestine.