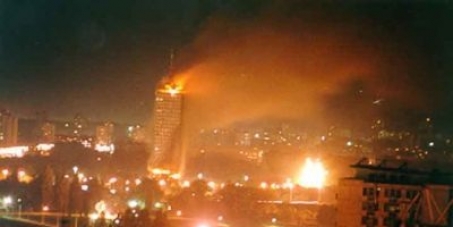 European Court of Justice: We’re accusing the NATO because of the bombing of Serbia and the Serbian Republic

By continuing you agree to receive Avaaz emails. Our Privacy Policy will protect your data and explains how it can be used. You can unsubscribe at any time.
This petition has been created by Милан . and may not represent the views of the Avaaz community.

Sign this petition
Милан .
started this petition to
Aaa
We’re accusing the NATO because of the bombing of Serbia and the Serbian Republic during the 90’s. Within the use of depleted Uranium and the bombing of Serbia and the Serbian Republic the Convention of Haag and Geneva was broken! Also without regarding the breaking of this convention we do have the right to accuse, because our fundamental basis for life is threatened. If we do want to, or not - we will live in contaminated areas and it’s not right, that nobody should assume the responsibility for that! Despite this unseen crime against the serbian people - the serbian people is accused instead - this is absurd and it probably has to do something with the phrase “Attack is the best defence”. For this reason it is necessary to initiate all the steps which are needed to bring those responsible people before the Court. I know that the Court of Justice actually isn’t very just, but this is no reason to stay silent, because as we all know - silence is a sign for consent. Believe me, there don’t exist impossible things, everything is possible, if you do work hard and persistently on it and I still haven’t recognized that anybody has initiate something regarding this issue. Regarding this fact our excuses like “…you couldn’t do anything anyway, forget it” are losing their validity, because as I mentioned before, I haven’t heard about it, that anybody has started to do something against it, has somebody? More information about the mentioned genocide you can find at the following links : http://www.peticije24.com/tuba_protiv_nato_zbog_bombardovanja_srbije_uranijumom_1999
Report this as inappropriate
There was an error when submitting your files and/or report.
Inaccurate Inappropriate language Hate speech Illegal Commercial/spam Offensive