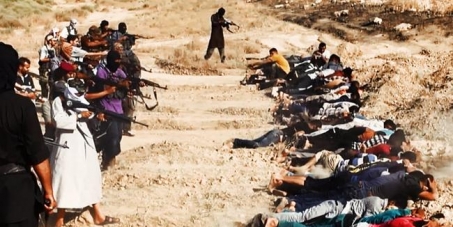 Against the teorrorist group ISIS. : Muslims speak up against ISIS! With our outmost disapproval and rejection!

By continuing you agree to receive Avaaz emails. Our Privacy Policy will protect your data and explains how it can be used. You can unsubscribe at any time. If you are under 13 years of age in the USA or under 16 in the rest of the world, please get consent from a parent or guardian before proceeding.
This petition has been created by Lizzie W. and may not represent the views of the Avaaz community.
x

Sign this petition
Lizzie W.
started this petition to
Against the teorrorist Group ISIS.
ISIS is a terrorist group that ended the lives of hundreds of different muslims, minorities and now also persecute Christians. They have comitted severe crimes throughout the middle east. We as muslims do NOT support ISIS, we do not recognize ISIS to be modeling Islam nor do they represent musims around the World.

Over and over again the media lay an overwhelming emphasis on a few groups consisting of muslims that are bad. We beleive this is a selective way of showing the complex reality and also damage the over all image of Muslims as a whole. We want the World to remember that Muslims are not a complete homogeneous group. We want the World to see that the vast majority of Muslims strongly condemms ISIS! The actions of ISIS will lash out on all the muslims around the World. Don't let their actions be the burden of the innocent!

We stand with out fellow brothers and sisters in humanity for peace, and justice!