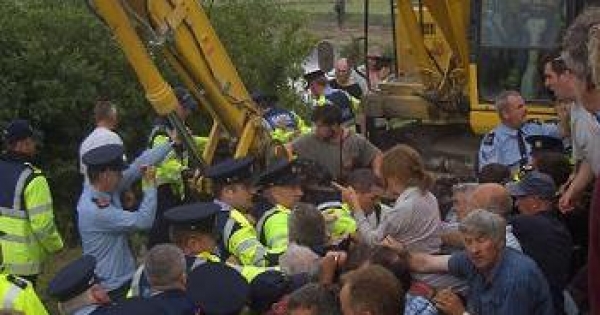 By continuing you agree to receive Avaaz emails. Our Privacy Policy will protect your data and explains how it can be used. You can unsubscribe at any time. If you are under 13 years of age in the USA or under 16 in the rest of the world, please get consent from a parent or guardian before proceeding.
This petition has been created by ShellToSea .. and may not represent the views of the Avaaz community.
x

Sign this petition
ShellToSea ..
started this petition to
Alex White - Minister for Energy and Natural Resources
Don't reward Shell for the abuses that they have committed and caused in county Mayo for over a decade. Shell E&P Ireland Ltd (SEPIL) is not a fit and proper person to apply for consent to operate a gas refinery which suffers from terminal 'Space Shuttle syndrome'. If you grant this consent, you will be validating Shell's violence, intimidation, bribery and corruption in Ireland.

In May 2015 two former Shell subcontractors gave sworn evidence in Castlebar Circuit Court that they supplied £25,000-worth of alcohol to Gardaí (Irish police) in 2007 on behalf of Shell E&P Ireland. One of the subcontractors - Neil Rooney - also gave evidence that on the day of an incident that left 20 campaigners injured, head of police operations in the area - Garda Superintendent Joe Gannon - told him: "I want to drive the fuckers into the sea" . Subsequently Shell CEO Terry Nolan wanted Rooney to alter his statement to protect Supt. Gannon saying: "he is our man, who needs protecting at all costs" . [1]

In 2010, President Michael D Higgins speaking about the Corrib Project stated: "The politicians involved contaminated the process... Agencies of the State got involved on the side of the developer, rather than on the side of the community. Given that alternative models were available in other countries, it was scandalous that we proceeded as we did ... In this case, it seems that planning is not for big people." [3]

In November 2006, President Michael D Higgins also spoke outside the refinery gates: “The issue is the right of the people of Erris to have security and safety. They want to be able to live their lives in peace. They deserve protection from any company that seeks to trample over their rights. What is important are issues of justice and no company should be outside the law.” [4]

One of the main problems with the project is the threat it poses to the local population. At a planning hearing into the onshore pipeline route in 2009, Shell consultants admitted that, in the event of a leak: “houses within 230 metres of the pipeline could burn spontaneously from heat radiation” [5]. In 2010 more than 400 residents of Kilcommon Parish accused Shell to subjecting them to “ongoing and escalating physical and psychological harassment”.[6]

The HSA has referred the death of Lars Wagner RIP to the Office of the DPP and until such time as that issue is resolved you do not have the right to consider Shell's application for a licence to operate a refinery and plunder our resources. [7]

Remember the words from 1987 of the then leader of the Labour Party, Dick Spring who spoke on the introduction of the terms under which Corrib Gas will be (non) taxed: " We will now, as a result of the changes this Government have made, get absolutely no return whatever from the development of any foreseeable oil find ..... in their cold-blooded decision to give those resources away, Fianna Fáil have committed what I have already described as an act of economic treason, one for which I believe they should not be forgiven by the young people and by the people at large.” [8]

Or remember the words of former Labour Minister for energy, Justin Keating whose reasonable 1975 oil and gas terms were later dismantled : "If we waste this resource, it will be a crime against Irish people. We're in danger of doing it." [9]

Remember that we are a few short months away from 2016 and do not dishonour those who fought and died bravely to gain our sovereign rights.

A 2013 paper published in the Climatic Change Journal accused Shell of causing 2.12% of total manmade carbon emissions.[10] Recently Journalist and 350.org founder Bill McKibben wrote "there is no more contemptible company on earth than Shell Oil. .... They watched the Arctic melt and then they decided that would make it easier for them to drill for more oil. People will remember Shell as a watchword for greed...." [11]
Minister, you have acknowledged that the issue of climate change is a matter of "life and death" and stated that “we have to translate targets into action in our own country”, well then a good way to make a start is to refuse the dirtiest company in the world permission to operate this dangerous pipeline. [12]