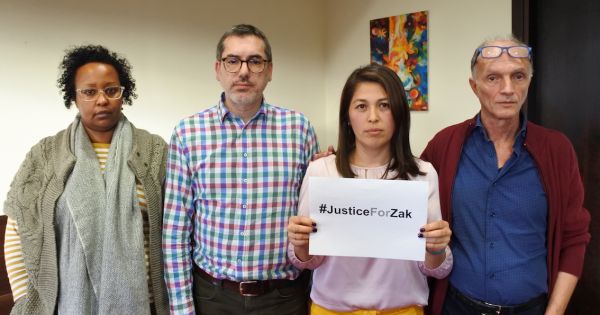 By continuing you agree to receive Avaaz emails. Our Privacy Policy will protect your data and explains how it can be used. You can unsubscribe at any time. If you are under 13 years of age in the USA or under 16 in the rest of the world, please get consent from a parent or guardian before proceeding.
This petition has been created by EATG E. and may not represent the views of the Avaaz community.
x

We are mourning him, shocked at the lynching that led to his death, the way in which the police officers acted and the public discourse that was constructed and spread to legitimise the violence perpetrated. We have been dismayed at the way in which the investigation has been carried out by Greek authorities.

The footage of the attack indicate that Zak was inflicted inhuman and degrading treatment that amounts to torture. We call all relevant Greek authorities for a swift, thorough, independent and impartial investigation into the events so that the perpetrators of the violence are brought to justice. The examination ought to take into consideration the motivation of the perpetrators.

We ask for due process and respect for the deceased, who if he were living would be presumed innocent. We call on the authorities to ensure the rule of law and respect for human life so that similar tragic events are not allowed to occur again.

Today: EATG E. is counting on you