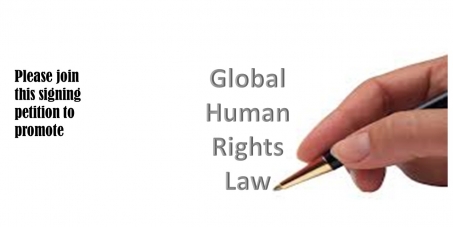 By continuing you agree to receive Avaaz emails. Our Privacy Policy will protect your data and explains how it can be used. You can unsubscribe at any time. If you are under 13 years of age in the USA or under 16 in the rest of the world, please get consent from a parent or guardian before proceeding.
This petition has been created by Vidar G. and may not represent the views of the Avaaz community.
x

Sign this petition
Vidar G.
started this petition to
All united nations’ Parliaments
Every united nation should ratify a complete National Human Right Law (NHRL). Most nations have signed the UN HR conventions, but merely bits and pieces are yet ratified. Therefore, every member nation should have a NHRL in order to justify the Global Human Rights Law (GHRL). Such a legally valid ratification is surprisingly easy and quick to do. It happened in Norway in 1999.

The Human Rights are like a global ‘One for All – All for One’ declaration. The need for this became well understood by most humans and nations after ww2, - due to all the inhuman doings and destructions of nations and civilizations. Think about it, - it is now a 100 years since the world wars started. What would be the outcome with an operational UN and GHRL at that time? It probably prevented ww3. However, a national regime can suddenly turn bad to its citizens and neighbor nations. Everyone needs a protection against that and NHRL/GHRL is an insurance (1).
How to get your National Human Right Law (NHRL): What You can do:
• Sing this petition to show your Members of Parliament (MP) that it is a call for action now.
What some positive MP should do:
• Some democratic MP should be convinced that a NHRL is morally, legally and nationally right.
• Gather the text from the UN conventions UNC, UDHR, ICCPR and ICESCR (2), and bind them togehter to a single booklet. (Additional signed conventions, amendments and protocols should be included.)
• Add an introduction page with paragraphs that put the NHRL above any conflicting law.
• Any MP can then propose in the Parliament that the NHRL should pass as national law.
This is how the ratification of the NHRL should happen:
• There will be a vote in the national parliament.
• MPs cannot morally decline the NHRL and expect to be re-elected by the citizens.
• Ergo, - a simple suggestion from one MP – and the nation should get its NHRL.
After the ratification:
• Have the results published.
• Inform the citizens of basic human rights.
• See to that the national law system actually follows up legally.
It works, - it happened in Norway with the NHRL ‘Menneskerettsloven’ in 1999. http://lovdata.no/dokument/NL/lov/1999-05-21-30

(1) Almost all the 193 member states of the United Nations (UN) have committed to ratify the Human Rights into their national laws. The member-states are obligated to secure their citizens’ rights concerning; private properties, self-determination, security, privacy, family, work, education, in addition to freedoms of thought, conscience, religion, expression and more. Even though the UN conventions seems inconsistent, the states are still obligated to be concrete and realize the rights.
(2) The UN fundamental inter-national obligations are stated in the UNC (United Nations Charter) where chapter VI provides the UN powers to investigate and mediate in international disputes. Chapter VII authorize international economic, diplomatic, and military sanctions and force to resolve the disputes. The UDHR (Universal Declaration of Human Rights) is the foundation of the later ICCPR (International Covenant on Civil and Political Rights) and ICESCR (International Covenant on Economic, Social and Cultural Rights). All this should be included in all NHRL.

Please use these options to promote by e-mail, twitter, facebook and other links. Thanks.
(Unfortunately, signing this petition seems to be blocked. That should not prevent anyone to act to get a HumanRights Law in their nations.)