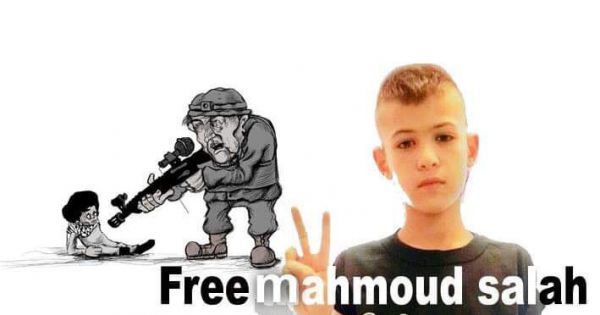 By continuing you agree to receive Avaaz emails. Our Privacy Policy will protect your data and explains how it can be used. You can unsubscribe at any time. If you are under 13 years of age in the USA or under 16 in the rest of the world, please get consent from a parent or guardian before proceeding.
This petition has been created by Shamsaan O. and may not represent the views of the Avaaz community.
x

Sign this petition
Shamsaan O.
started this petition to
Add your name to the call to FREE 14 year old MAHMOUD SALAH, that Israeli forces shot, abducted, subjected to amputation in an Israeli hospital where he is still being held without charge. Demand that he is immediately released to his family so that he may receive the urgent care and support needed to aid his recovery and healing.

Israel must put an end to the violent attacks, inhumane treatment, illegal transfer and detention of Palestinian children. Enough is enough!

14 year old child, Mahmoud was playing with friends during Ramadan after iftar dinner on 21 May 2019 outside his home in the village of Al Khader south of Bethlehem. Israeli snipers, fired live rounds and gas bombs at villagers and homes. Mahmoud was shot with an explosive bullet in the leg; he fell to the ground screaming, lay writhing in pain and bleeding for over 30 minutes. Soldiers denied all access to him, threatening those who approached with guns and refused to allow any medical assistance that was being offered by Palestinian medics at the scene. They then abducted the child refusing to respond to confirm where he was being taken and to date he has not been charged with a crime.

Mahmoud woke up 2 days later in an Israeli hospital in pain, only to realise then that his leg was amputated. He remains in Israeli custody, is traumatised and is in desperate need of support, physically and emotionally. His family continue to be denied access to him and have not been granted permits to enter Israel where he is hospitalised currently.

Act now to support the demand for Mahmoud Salah’s immediate release, for his medical file to be handed to his family so that a trusted medical team can take over his care. Mahmoud needs to be transferred to a medical facility in Palestine where his family has access to him and can support him through recovery and healing process.

Palestinian children are frequently subjected to violent injuries, beatings, abuse, and interrogations without parents or lawyers present in violation of international law. We urge people of conscience around the world to take action to demand freedom for Mahmoud and all detained and jailed Palestinian children in occupation detention facilities, interrogation centres and prisons.

To Mahmoud and all the children injured, permanently maimed and whose rights have been violated by the Israeli state: We stand by you and are holding you in our hearts. We will not give up until you are free. You are not alone.

Add your name, Sign the petition to demand Mahmoud’s immediate release. Share widely and encourage others to support Mahmoud Salah and get involved in the struggle for Palestinian freedom.

Today: Shamsaan O. is counting on you