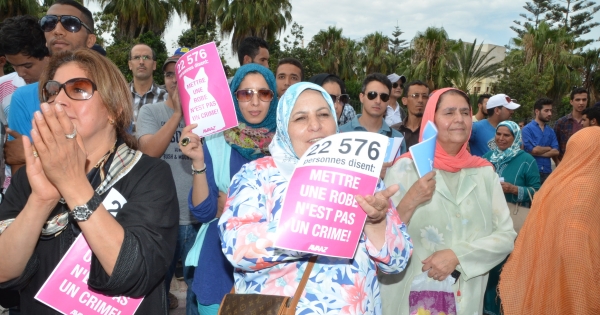 Minister of Justice: Wearing a dress is not a crime!

By continuing you agree to receive Avaaz emails. Our Privacy Policy will protect your data and explains how it can be used. You can unsubscribe at any time. If you are under 13 years of age in the USA or under 16 in the rest of the world, please get consent from a parent or guardian before proceeding.
This petition has been created by Majda C. and may not represent the views of the Avaaz community.
x

Sign this petition
Majda C.
started this petition to
Au ministre de la Justice et des Libertés , Moroccan Minister of Justice and Liberties
Update : 14th July 2015
Historic victory in Morocco! After 28,000 of us raised the alarm, thousands flooded social networks and hundreds protested in front of the court of Iznegane on the day of the verdict, Siham and Soumia were exonerated and their perpetrators prosecuted! “Their release was obtained exclusively thanks to public opposition” , said one of the defense laywers. Let's celebrate and keep fighting for a Morocco that respects the rights of all!
______________________________________________________________

Please note, this campaign text has been google translated from the original in French.

Two young women were arrested in Morocco, specifically in Souk of Inezgane, a few kilometers from the city of Agadir. The reason for their prosecution: "Offences against morality". One of the vendors found their dresses indecent. The crowd tightened on the two ladies who might have been lynched without police intervention. They spent the night at the police station before being presented to the public prosecutor the next day, under arrest. The prosecutor's decision was to continue the case for “gross indecency”. The hearing will take place on 6 July.

If we create a massive wave of support, Mr El Mostafa Ramid, Minister of Justice and Liberties will be forced to take a stand for their release, sentencing the offenders, and protecting the rights of all Moroccans to freedom and safety no matter how they chose to dress.

Note that none of the vendors who put the lives of two women in danger by exposing them to physical and moral aggression, has been prosecuted. This is an infringement on individual freedoms and human rights! A significant part of Moroccan women wear dresses for decades. Are these the laws that manage public space today or is it the individuals with the least respect for the freedoms and rights of others, on behalf of their own standards?

This is a regression and a case that opens the way for those who want to rise up in moralizing or preaching to impose their own laws! This is a breach of the principles of living together and the security of citizens!

This is a violation of fundamental principles of freedom and equality between men and women adopted by the Moroccan State, including in the preamble of the Moroccan Constitution that says "True to its irreversible choice to build a democratic state, the United Morocco [...] develops an inclusive society where all enjoy security, freedom, equality of opportunity, respect for their dignity. "

Similarly, Article 19 of the Constitution (Title II on fundamental rights and freedoms) states: "Men and women shall enjoy in equal to civil rights and freedoms, political, economic, social, cultural and environmental. [...] The Moroccan government is working to achieve parity between men and women. It is created for this purpose, an Authority for parity and fight against all forms of discrimination. "

We are all concerned! Wearing a dress is not a crime!

Today: Majda C. is counting on you

Majda C. needs your help with "Minister of Justice: Wearing a dress is not a crime!". Join Majda C. and 27,636 supporters today