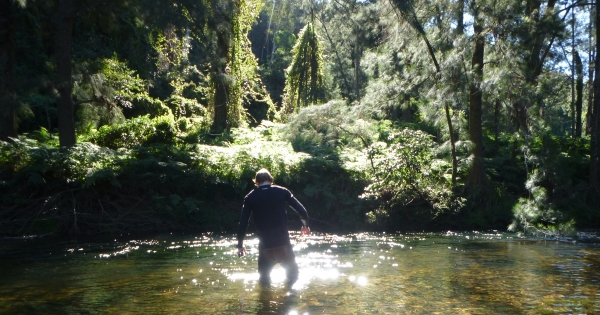 Australian Minister for the Environment, Josh Frydenberg: Stop the Dargues Gold Mine in New South Wales

By continuing you agree to receive Avaaz emails. Our Privacy Policy will protect your data and explains how it can be used. You can unsubscribe at any time. If you are under 13 years of age in the USA or under 16 in the rest of the world, please get consent from a parent or guardian before proceeding.
This petition has been created by Tom W. and may not represent the views of the Avaaz community.
x

Sign this petition
Tom W.
started this petition to
Australian Minister for the Environment, Josh Frydenberg
Note: this mine has been approved, along with three subsequent expansions. Frydenberg ignored this petition, and the mine is under construction (July 2018). However, I will leave this petition active for those who wish to show solidarity and further disprove the company's claim of general social license (in addition to what local communities have stated on written record).

The Dargues Gold Mine is located near the town of Majors Creek in New South Wales, Australia. It's at the headwaters of a pristine drinking water catchment (the Deua River), organic agricultural projects, a national park, tidal estuary and marine park.
The mine will produce millions of tonnes of heavy metal-laden slurry, known as tailings. This waste will be chemically altered by reagents including potassium amyl xanthate, which is toxic to aquatic life at very low concentrations. Most of the tailings will be stored in an admittedly permeable earthen & waste-rock dam, which is susceptible to overflow with heavy rain or structural collapse (think the Samarco mine in Brazil or Mt Polley in Canada). The rest of the tailings will be stuffed underground, where they will interact with groundwater indefinitely, reaching surface water via springs.

The mine will also lower the water table, reducing the baseflow to the already low-volume river system. The company has committed to a 'compensatory flow program', meaning it will pump dam-water (also taken from the catchment) and contaminated water from historical mine shafts into the river system to make up for the inflow of groundwater into the mine.

Sediment discharges from the mine site (runoff from stripped-back soil) have already occurred, causing turbidity in the river and the death of frogs and fish due to the illegal use of a flocculating agent. The company has been convicted on three counts of water pollution by the Environment Protection Authority (2013), and mining hasn't even started yet.

To top it off, the engineers contracted to design the tailings storage facility (Knight Piesold) are the very same who designed the Mt Polley facility in Canada. Those foundations failed in 2014, leading to one of the greatest environmental disasters in recent history. Knight Piesold denies responsibility and has never been held to legal account, despite two separate investigations (the Mt Polley Independent Expert Panel and the Ministry of Energy and Mines) pointing to their complicity.

The Dargues Mine threatens (a) the health of 30-100,000 thousand people of the Eurobodalla Shire (depending on the season), (b) the sensitive aquatic, avian, and mammalian ecosystem between the mine site and the ocean, (c) sustainable livelihoods based on organic farming, eco-tourism, as well as the value of property and homes in the region.

This mine was originally approved in 2011, against overwhelming will of the people. An appeal to the Land and Environment Court (2012) imposed strict conditions on the mine. However, that court order has been eroded with consecutive modifications, involving the quashing of limitations and the withdrawal of environmental commitments. All of which has been approved by the NSW state government despite almost unanimous opposition from the community.

The Dargues Gold mine just had its third modification approved by the Planning Assessment Commission. The company is scheduled to begin extraction and waste production in 2017. This operation must not be allowed to proceed. Public opposition has so far been carried mainly by residents of this quiet rural valley. Now we're calling on you, the international public, to help us save this beautiful place and secure the health of our future generations.

Sign this petition to our Minister for Environment, Josh Frydenberg, to revoke the Dargues mining licence. Then send it on as you see fit. Let's send a clear signal that our precious freshwater sources are not to be considered an 'acceptable risk' for short-term profit.