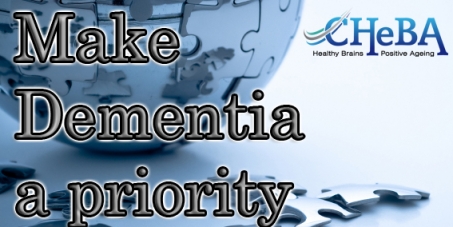 Australia will host the next meeting of the Group of Twenty (G20) in November. We ask our Prime Minister, Mr Tony Abbott, to place dementia prominently on the G20 agenda. He will follow the lead of the British Prime Minister who recently hosted the G8 Dementia Summit, and called dementia “the disease that steals lives, wrecks families and breaks hearts” and recognised it as “an increasing threat to global health”.

Of course, dementia is a global problem, currently costing more than $600 billion annually, and growing exponentially. The greatest growth is in low and middle income countries (LMICs). Already, there are more dementia patients in LMICs, and by the middle of the century, more than 70% of dementia patients will be in these countries, which are ill-equipped to deal with the burden of dementia. In many countries, there is a lack of awareness of the problem, dementia is poorly diagnosed and facilities for treatment and care are rudimentary. ADI estimated that 3 out of every 4 of the 36 million people worldwide living with dementia have not been formally diagnosed and are not receiving treatment and care. The “treatment gap” is most significant in developing nations. In Australia, the average delay between the onset of noticeable symptoms and a firm diagnosis is 3.1 years. Putting dementia on the G20 agenda and getting a commitment from the leaders of countries like China, India and Brazil is likely to have a remarkable impact on dementia awareness, care and research around the world.

More funds are needed for the diagnosis, treatment and care of dementia patients. An investment into dementia research is urgently needed from all countries, led by but not restricted to the rich nations. In many parts of the world, research into dementia is non-existent. This, combined with the relative neglect of dementia research in rich countries, has created a major gap between the disability and suffering attributable to dementia and the research investment into its diagnosis, treatment and appropriate care. Greater research funding will help develop new treatments, but more importantly, exploit the current knowledge to develop strategies to prevent dementia or delay its onset. The G8 has set ambitious targets. We ask Mr Abbott to take the lead and make it a truly global fight against the dementia time bomb.

Today: Perminder S. is counting on you