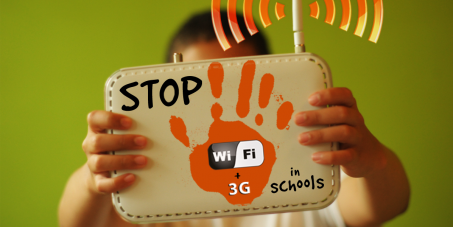 By continuing you agree to receive Avaaz emails. Our Privacy Policy will protect your data and explains how it can be used. You can unsubscribe at any time. If you are under 13 years of age in the USA or under 16 in the rest of the world, please get consent from a parent or guardian before proceeding.
This petition has been created by wifi I. and may not represent the views of the Avaaz community.
x

School children are facing a massive health crisis if the government and education authorities continue to ignore the warnings on the potential health effects from long-term exposure to electromagnetic radiation (EMR) from wireless communication devices.

In May 2011 the World Health Organization/ International Agency for Research on Cancer (IARC) classified EMR as “possibly carcinogenic to humans” - wireless technologies are now considered as a possible cancer causing agent.

Just like the case with smoking, the possibility of illness manifesting from prolonged or accumulative, low-level exposure to wireless radiation may not be known until after years of exposure.

Some responsible governments and authorities overseas have banned or warned against WiFi use in schools until it has been proven harmless for long-term use. The Council of Europe have called for a ban on WiFi use in schools and urge governments to act swiftly. In order to protect children’s health, the French National Assembly voted (March 2013) in favour of wired connections rather than WiFi.

We need to urgently send a strong message to the Australian government asking them to do the same, and to put children’s health ahead of the convenience of WiFi and short-term profits.

Many scientists and medical experts warn that long-term exposure to EMR interferes with the body’s internal bioelectrical signals which may lead to diseases such as cancer, immune dysfunction, infertility, reproductive disorders, DNA damage and other cognitive and neurological disorders. Children are also most vulnerable as they absorb more radiation due to their thinner skulls, bones and developing cells. Their life-time exposure will also be greater than adults today.

Even the Australian Radiation Protection Nuclear Safety Agency (ARPANSA) states "research relating to children is limited and the possibility of harm cannot be completely ruled out." The current safety standards only protect against heating of body tissue (thermal effects) in a short period of time. The safety standards do not account for any biological effects from prolonged or accumulative exposure to low-level electromagnetic radiation.

Scientific studies on the long-term health effects of WiFi on children have not been conducted, yet this technology is being vigorously rolled out in schools without parental consent or choice. Children are being involuntarily exposed to wireless radiation for 6 hours a day, 5 days a week. This is unacceptable as there are safer wired options for schools to provide children with internet access.

The overall telecommunications industry is worth trillions of dollars and has the ability to greatly influence politics, research and public perception. A massive public outcry however could tip the balance and get our leaders to act promptly to favour public health ahead of industry profits.

Let’s raise our voices calling on the government to adopt the precautionary principle, and to act now to protect our children and future generations. Stop the use of WiFi and 3G internet in schools until long-term exposure is proven harmless. Favour wired internet connections, and reduce microwave electromagnetic radiation exposure from all wireless devices.

Please get informed, take action and pass on this knowledge.

Today: wifi I. is counting on you

wifi I. needs your help with "Australian Schools: Stop Exposing Children to Radiation from WiFi and 3G until long-term exposure is proven harmless". Join wifi I. and 2,029 supporters today