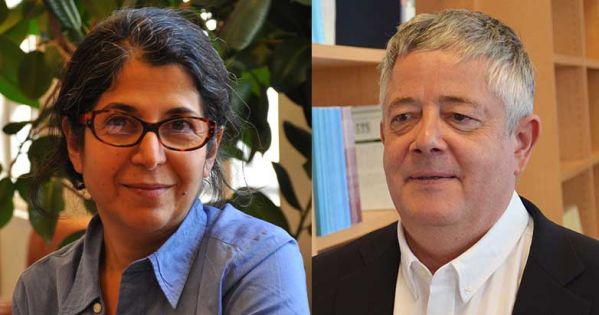 By continuing you agree to receive Avaaz emails. Our Privacy Policy will protect your data and explains how it can be used. You can unsubscribe at any time. If you are under 13 years of age in the USA or under 16 in the rest of the world, please get consent from a parent or guardian before proceeding.
This petition has been created by Fariba &. and may not represent the views of the Avaaz community.
x


On 5th June 2019, Fariba Adelkhah, an anthropologist, and
Roland Marchal, a sociologist, both research fellows at Sciences Po, Paris, were arrested in Iran on the pretext of violating state security. This grotesque accusation would be still more unbelievable if confessed on television—one of the Islamic Republic’s customs. Fariba Adelkhah and Roland Marchal have engaged in no political activity either within or against in Iran, they are not linked to any intelligence service, and have no agenda other than scientific enquiry. They are academic prisoners.

In the impenetrable diplomacy of regional crisis Tehran seems to
have taken as pawns these two scholars, one of whom has shed light on the Islamic Republic’s complexities, the other on the West’s heavy-handedness in this part of the world. Paradoxically, the Guardians of the Revolution have confirmed all our worst suspicions of Iran by these arrests. As fellow scholars we cannot accept that colleagues can be arbitrarily deprived of their freedom, to serve as bargaining chips on the international scene or as a lever in the regime’s own factional intrigues.

Four fruitless months of negotiation between Paris and Tehran have
now passed. It is clear that our professional solidarity, not only with Fariba Adelkhah and Roland Marchal, but also with the fifteen or so foreign scholars similarly arrested, requires us to suspend all forms of institutionalized academic and scientific cooperation with the Islamic Republic—apart from continuing to welcome Iranian students and individual colleagues.

Decency also demands it. How can we continue to cooperate while colleagues rot in Tehran’s jail? Basic precaution reinforces the case. The French Ministry of Foreign Affairs advises French citizens not to travel to Iran, and the National Centre for Scientific Research (CNRS) prohibits any visits. Academic institutions that think otherwise would be taking a senseless risk. The families of any staff members arrested would be entitled to hold them legally responsible.

In trying to keep Fariba Adelkhah and Roland Marchal's incarceration
confidential by public restraint and withholding information, diplomats,
academics and French journalists gave the Revolutionary Guards an opportunity to defuse the infernal machine they had set in motion on 5th June. They were given four months but chose not to take that opportunity, perhaps intoxicated by their regional triumph.

We weigh our words with care. We do not call for a boycott, a politically charged term. We neither condemn the regime nor question the legitimacy of Iran’s geostrategic interests as a sovereign member of the international community. We ask only if we can continue to work with its universities. As things now stand that is impossible. Nor do we talk of hostages but rather of diplomatic pawns. So far as we know the Revolutionary Guards are not asking for ransom. It appears that they want to influence external diplomacy, or internal intrigue, or even legal proceedings against their agents under arrest in Europe. We should also avoid mention of researchers with dual nationality. Not all
academics in Evin prison have that status—and if they did it would
not affect the issue. To refer to dual nationality could be construed as an expression of weakness, a concession to Tehran. It might seem that to arrest academics of dual nationality were only partly illegitimate, or of lesser concern. This is obviously not the case, as the Revolutionary Guards must learn.

The objection that the suspension of scientific cooperation would penalize our Iranian colleagues already facing the Islamic Republic’s repression does not stand up to scrutiny. Exchanges with foreign countries have clearly not protected them, so it is hard to see that the proposed temporary suspension would worsen their plight.

While the Revolutionary Guards may be indifferent to knowledge, they cannot completely ignore Iran’s social pressures—their own children go to university—or the interests of other public institutions. To suspend our scientific cooperation would mean entering into the interplay of forces beneath Tehran's politics by strengthening the hand of those leaders who deplore this cynical policy of pawn-taking, so harmful to their country's interests. The last thing we want is to isolate our Iranian colleagues. We want, to the contrary, to persuade their government to recover its respect for the international rules that make cooperation possible. And we reiterate our solidarity with our Iranian colleagues.

Today: Fariba &. is counting on you