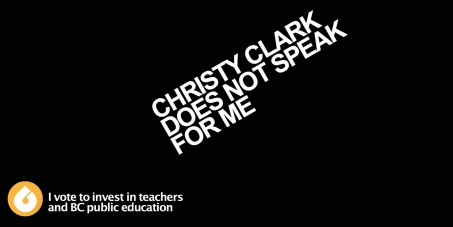 BC Premier Christy Clark: Increase funding to Public Education in BC

This petition is closed
50 Supporters
Sally M.
started this petition to
BC Premier Christy Clark
As Minister of Education in 2002, Christy Clark stripped the fairly negotiated Collective Agreement with BC Public School teachers that assured class size and class composition as well as the number of specialist teachers. Since then the Courts have ruled, twice, that those actions were illegal. The government has again appealed and we now await a hearing in the BC Court of Appeal in October.

Over the past 12 years funding and staffing levels have continued to decrease year after year in the province's public schools. After 16 months of efforts to negotiate a new contract, teachers in British Columbia began limited job action in April and it escalated to rotating strikes May 26 and a full walk-out on June 16. Teachers want better support for students and a fair deal for teachers. They also want to assure Public Education will remain a strong and viable pillar of society.

Funding needs to increase to support students with special needs. More resources including textbooks, lab equipment and computers are required for the benefit of all students. The per student funding is $1000 per student less than the national average.


It's a matter of priorities. British Columbia's children, today and in the future, deserve a strong, stable, well-funded Public Education system. It only makes sense for the common good of society to have well-educated children who will become engaged, creative, contributing citizens in the future. It's time for the Premier of British Columbia, Christy Clark, to increase funding to Public Education.

Here are links to other articles that contribute more information regarding this topic.

https://www.youtube.com/watch?v=hIYV4aajS_0 Economist from the Canadian Centre for Policy Alternatives discusses the affordability factor

Today: Sally M. is counting on you

Sally M. needs your help with "BC Premier Christy Clark: Increase funding to Public Education in BC". Join Sally M. and 6,613 supporters today