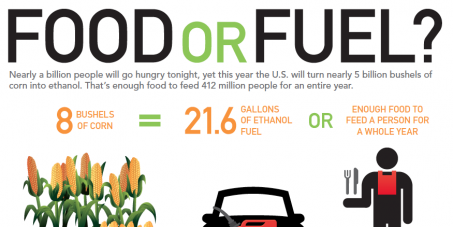 Ban food crops as a source for biofuels

By continuing you agree to receive Avaaz emails. Our Privacy Policy will protect your data and explains how it can be used. You can unsubscribe at any time. If you are under 13 years of age in the USA or under 16 in the rest of the world, please get consent from a parent or guardian before proceeding.
This petition has been created by Jonathan S. and may not represent the views of the Avaaz community.
x

Sign this petition
Jonathan S.
started this petition to
Barack Obama, President of the United States; Tom Vilsack, Secretary of the U.S. Dept. of Agriculture; D. Steven Chu, Secretary of the U.S. Dept. of Energy
The use of food crops, mainly corn, for producing biofuel is diverting millions of tons of necessary sustenance from the food chain that supports people. Many farmers now grow crops that are delivered to fuel companies instead of going to feed human beings. The price of corn, for instance, has risen significantly in a number of countries due to increased competition from biofuel producers, an increase that already poses a grave danger to millions of consumers, particularly those on the edge of economic survival. This is counterproductive, unwise and immoral.

While alternative non-petroleum fuels are a must if we are to reduce carbon emissions and the impact of global climate change, it is critical that policy and law guarantee that such fuels are produced in a manner sustainable for both people and planet. The only sources permissible for the production of biofuels should be waste materials (from disposed household, industrial and commercial foodstuff; forestry; construction; agriculture, etc.) or non-food crops and substances grown specially for the biofuel market (algae, etc.).