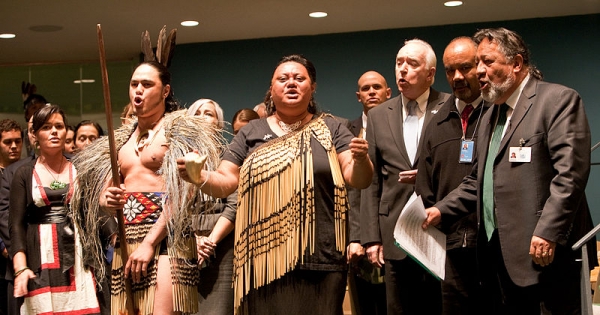 By continuing you agree to receive Avaaz emails. Our Privacy Policy will protect your data and explains how it can be used. You can unsubscribe at any time. If you are under 13 years of age in the USA or under 16 in the rest of the world, please get consent from a parent or guardian before proceeding.
This petition has been created by Katherine P. and may not represent the views of the Avaaz community.
x

Sign this petition
Katherine P.
started this petition to
Barack Obama, Stephen Harper, Tony Abbott, John Key
In 2007 when the UN Declaration on the Rights of Indigenous Peoples was voted on by the General Assembly 143 countries voted in favour, only four countries did not: the US, Canada, Australia, and New Zealand. These are countries that have historically benefitted from the forcible take over of indigenous people's land and resources.

Later all 4 countries switched their positions to "supporting" the declaration as a non-legally-binding document. The results of which have been court cases in those countries whereby judges have ruled against indigenous rights.

If the document is non-legally-binding, then these countries are not in fact supporting their indigenous populations.

In Australia the aboriginal populations are being denied treaties with the government and are even being denied conventions to participate in a process to remove racist powers from the constitution. In the US the San Carlos Apache have had their sacred land taken without consultation and given to foreign mining interests. The UN has asked Canada to investigate the high number of missing and murdered indigenous women and girls. In New Zealand secret crown negotiations are being made concerning the TPP Agreement which may strip the Maori of intellectual rights in their own vegetation.

Indigenous rights are human rights. Our future depends on the lives and wisdom of all peoples. It is time we demand our countries ratify the UN Declaration on the Rights of Indigenous Peoples as a part of each countries's federal law.

Here is where you can find out more about the UN Declaration on the Rights of Indigenous Peoples: http://www.un.org/esa/socdev/unpfii/documents/DRIPS_en.pdf

Remember 143 countries already include this document as their law!