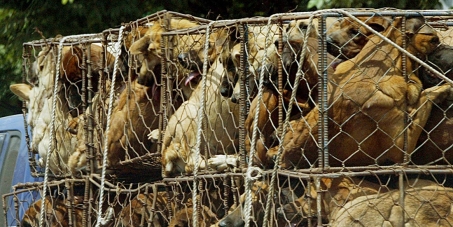 By continuing you agree to receive Avaaz emails. Our Privacy Policy will protect your data and explains how it can be used. You can unsubscribe at any time. If you are under 13 years of age in the USA or under 16 in the rest of the world, please get consent from a parent or guardian before proceeding.
This petition has been created by Rachel H. and may not represent the views of the Avaaz community.
x

Sign this petition
Rachel H.
started this petition to
Mr. Thomas Bach, President of the IOC, President Geun-Hye Park of South Korea, Yang-Ho Cho, President of PyeongChang 2018 Winter Olympics
Albert Schweitzer said,
"The thinking person must oppose all cruel customs no matter how deeply rooted in tradition or surrounded by a halo…. We need a boundless ethic, which includes the animals also."

"The $2 billion dollar-a-year South Korean dog and cat meat industry, which extinguishes the lives of approximately two and a half million dogs a year for meat or gaesoju, a dog wine or broth, and thousands of despised and doomed cats for so-called “health” tonics or goyangyeesoju, and soup, operates in a sordid and illicit world where farmers and butchers kill with frightening impunity in the most abominable fashion."

In South Korea, dogs are deprived of everything that is natural to them. From birth to death, they are imprisoned in deplorable tiny excrement encrusted raised up wire cages, fed rotten garbage with no protection from scorching heat of summer and freezing cold of winter with no water, medical care or human interaction. This is a hell on earth for these dogs and they have to endure the life of utter misery and agony just to meet their ghastly fate of being electrocuted, hanged, beaten, thrown into boiling water, burned sometimes alive,...

It is hard to believe that a nation such as South Korea which is one of the major economic power (13th largest) and boasts the highest education level in the world is still committing this type of barbaric and inhumane atrocity in this day and age. But for the millions of dogs and cats that are being slaughtered each year in South Korea's markets, slaughterhouses, restaurants, dog farms and in private residences, it is a tragic reality and nightmare that they can't escape from. If South Korea wants to join the civilized nations and be respected not only as a nation of economic miracle but as a nation of conscience, they need to strengthen their animal protection law and ban the dog and cat consumption once and for all. This has been going on way too long and it's time for their government to take a moral leadership for their citizens. Not only does this benefit the animals of South Korea but it will further their economic interest in the world because we will not stop speaking out against South Korea.

South Korea can host the most extravagant Olympic game in the history of the Olympics but as long as this treachery against the animals known to be our most loving and faithful companion continues, it will be tainted with heartless brutality and their country and its people will be subject of world's condemnation.

I will boycott PyeongChang 2018 Winter Olympics and the South Korean businesses until the South Korean government stops neglecting their duty and finally take steps to illegalize the horrific cruelty of dog and cat consumption.

I also urge you to write to the Olympic Committee that we you will boycott PyeongChang 2018 Winter Olympics.

Today: Rachel H. is counting on you