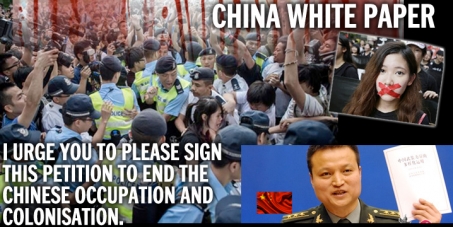 By continuing you agree to receive Avaaz emails. Our Privacy Policy will protect your data and explains how it can be used. You can unsubscribe at any time. If you are under 13 years of age in the USA or under 16 in the rest of the world, please get consent from a parent or guardian before proceeding.
This petition has been created by Ladykylie and may not represent the views of the Avaaz community.
x

Sign this petition
Ladykylie
started this petition to
British government
The Sino-British Joint Declaration was signed in 1984 as a pledge of the British government to the people of Hong Kong that the rights of Hongkongers after 1997, the existing capitalist system and way of life shall remain unchanged for 50 years.

But the real situation was far from the truth. In 17 years, under Chinese rule, Hong Kong appears to be even more 'colonial' than the British era. Chinese rule has led to the suppression of human rights and freedom of speech and press, loss of our border control, the deliberate un-checked immigration, the border opening in the North East New Territories, elimination of local culture, deterioration of rule of law, daily recourse, endangering personal safety and sovereignty to the 7 million Hongkongers. Introduction of brainwashing patriotic and nationalistic elements across all subjects in education, pro-China rhetoric and distorted history in the museums are only two of the many means China and its government conduct cultural genocide in Hong Kong. We, the Hong Kong people, have no choice and no say even though we have been trying to voice out our opinions, which are ignored by the Hong Kong government. There seems not much else we can do except to quietly accept this fate dictated on us by others. As a matter of fact, CCP has never stopped openly tightening its control over the internal affairs in Hong Kong, yet the British government, turns a blind eye to what has truly been happening in Hong Kong and issues bi-annual report time after time insisting that the so-called “One Country, Two Systems” has been working fine over the past 16 years.

The White Paper issued by the Chinese government on 10th June, 2014 sounded the death knell, stating 'the Beijing government has "comprehensive jurisdiction" over Hong Kong. The State Council has called for vigilance against external forces making use of Hong Kong to intervene in China's internal affairs. The information office, called for the suppression of "the very few people" that collude with outside forces to damage the implementation of “One Country, Two Systems” in Hong Kong. It also noted that some deep-seated conflicts were gaining greater prominence, and different sectors should try to resolve them collectively. China could not even bother to wait through the promised 50 years until 2047 to tear off the mask and guise. One Country Two Systems was certified dead well before the due date.

Hong Kong should be protected by the The Sino-British Joint Declaration as well as The Basic Law. Now that China has, without doubt nor hesitation, nullified The Declaration and breached The Basic Law by putting forward their White Paper. It is time for the British government to face up to its responsibility and interfere. Together with the international community and United Nation, Britain should pressure upon China to return Hong Kong. There are more than 3 million British nationals in Hong Kong. Our nationality is British. We are not Chinese by identity, language, culture, and loyalty.

I urge you to please sign this petition to end the Chinese occupation and colonisation.
Thank you!

Today: Ladykylie is counting on you