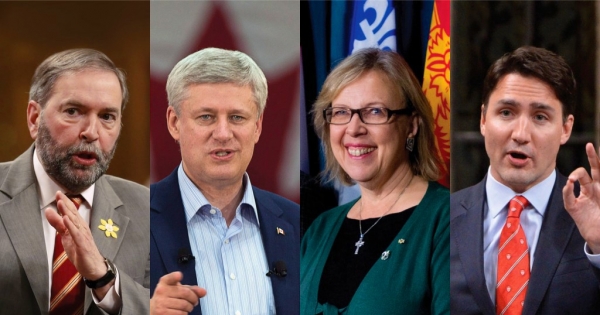 Include climate change in the leaders' debates!!

By continuing you agree to receive Avaaz emails. Our Privacy Policy will protect your data and explains how it can be used. You can unsubscribe at any time. If you are under 13 years of age in the USA or under 16 in the rest of the world, please get consent from a parent or guardian before proceeding.
This petition has been created by Alice Z. and may not represent the views of the Avaaz community.
x

Sign this petition
Alice Z.
started this petition to
Maclean's, CBC, CTV, and Shaw/Global, Google Canada and The Globe and Mail, TVA
Climate change is the greatest global challenge faced by our generation. We must keep global temperature rise under the unacceptably dangerous level of 2 degrees Celsius in order to create a sustainable future for generations to come.

With so much at stake, we want to see how our political parties and leaders plan to respond to this critical challenge -- it's the question no one's committed to asking. But it's imperative that a federal election debate on climate change be broadcast on a major national network . At the very least, climate change should be included as a debate topic in any debate hosted by The Globe and Mail/Google Canada, CBC/CTV/Global, TVA, and Maclean’s.

In April, more than 25,000 Canadians rallied in the streets of Quebec City calling for greater action on climate change and pipeline regulations. Several provinces have taken the initiative to address climate change by setting emissions targets and implementing carbon pricing policies, but the federal government isn’t doing nearly enough to meets its international commitments to reduce greenhouse gas emissions.

With the international climate change negotiations taking place shortly after the federal election, we want to see how our climate future will be represented by our next national government.

Today: Alice Z. is counting on you

Alice Z. needs your help with "Include climate change in the leaders' debates!!". Join Alice Z. and 1,080 supporters today