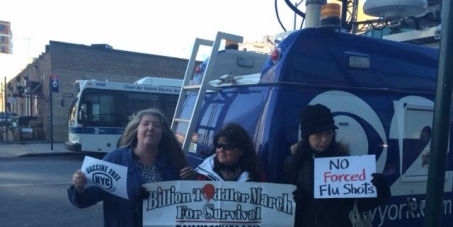 By continuing you agree to receive Avaaz emails. Our Privacy Policy will protect your data and explains how it can be used. You can unsubscribe at any time.
This petition has been created by Sallie O. E. and may not represent the views of the Avaaz community.

Sign this petition
Sallie O. E.
started this petition to
CBS President and CEO, Leslie Moonves
CBS, The One to WATCH!

I have heard that when the TRUTH comes out, it will be aired on CBS. Within a week of hearing this, Time Warner cut them off claiming they were making unreasonable demands. Subsequently CBS is back on TW. This is what has transpired since their return which may cause you to think, "Do we have a Mainstream Media FRIEND in CBS?".

2) Now STARS are saying it... and ON CBS TOO! http://tv.greenmedinfo.com/bill-maher-big-pharma-poisoned/

P. S. Furthermore, a friend writes, "I agree. When they were trying to mandate the flu vaccine for healthcare workers out here on long island we had a Rally and the only news agency that carried it was CBS."

P. P. S. I hand delivered a DVD at the hearing on 10/23/13 to the Secretary to the NYC Dept of Health (https://www.youtube.com/watch?v=X-CgNY1RNDc) and then sent it to her for every member of the panel who would vote to Mandate Vaccines, but it was ignored. Here is a link to this movie I delivered/sent, "Silent Epidemic: The Untold Story of Vaccines": https://www.youtube.com/watch?v=K1m3TjokVU4 . Had they watched it, they couldn't have mandated vaccines. Had they read my legislation (link beneath), they also couldn't have. Well, they did, but they shouldn't have!

BAN VACCINES 2013! http://BillionToddlerMarchForSurvival.blogspot.com/
Report this as inappropriate
There was an error when submitting your files and/or report.
Inaccurate Inappropriate language Hate speech Illegal Commercial/spam Offensive
×

Today: Sallie O. E. is counting on you