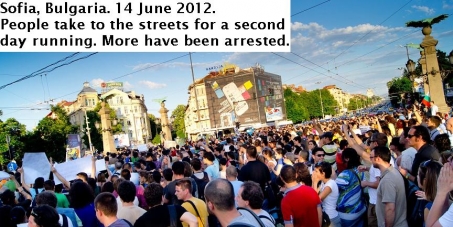 By continuing you agree to receive Avaaz emails. Our Privacy Policy will protect your data and explains how it can be used. You can unsubscribe at any time. If you are under 13 years of age in the USA or under 16 in the rest of the world, please get consent from a parent or guardian before proceeding.
This petition has been created by Maria C. and may not represent the views of the Avaaz community.
x

Amendments of Bulgaria’s Forest Act, adopted on 13 June 2012 by the Bulgarian Parliament, will lead to the plundering of the country’s last significant natural resource - its forests, including those forming Natura 2000 areas. Concerned citizens and the coalition of environmental NGOs “For the Nature” are calling on Bulgarian President Rossen Plevneliev to veto the unscrupulous changes and safeguard Bulgaria’s forests. The environmentalists are also sending a signal to the European Commission for unauthorized governmental aid to oligarchic corporate organisations, which the amendments represent.

The new provisions violate the Constitution of the Republic of Bulgaria, as well as European environmental and competition law. It will allow overdevelopment and degradation of forests, agricultural lands and protected areas and over-exploitation of forest resources, with long term adverse consequences such as habitat loss. Clearing of forests also adds to greenhouse gas emissions and climate change.

Specific changes give companies the right to carry out construction, on land officially designated as forest, without competition, without a contract, and without payment of any fees to the state. Abolishing such fees constitutes unauthorised government aid, while the uncontested administrative transfer of construction rights constitutes a breach of competition law and is likely to give businesses with close ties to the authorities the upper hand in 'bidding' for public projects.

“The amendments of the Forest Act go against the public interest and contravene EU and Bulgarian legislation on competition as well as nature protection”, said Konstantin Ivanov, Head of Communications at WWF Bulgaria. “To put it simply, the amendments mean further deforestation and construction works in forests and protected areas. They practically allow for the construction of ski runs and ski facilities without changing land use and for the acquisition of building rights on public land without tender and for an indefinite period.”

A series of protests in the past six months have demonstrated massive public support for the protection of Bulgaria’s forests and protected areas. The public outcry, however, has been ignored by the ruling majority.

We need your help! Stop this injustice!