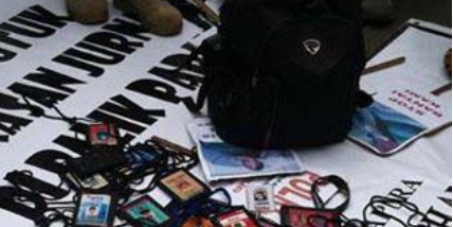 By continuing you agree to receive Avaaz emails. Our Privacy Policy will protect your data and explains how it can be used. You can unsubscribe at any time. If you are under 13 years of age in the USA or under 16 in the rest of the world, please get consent from a parent or guardian before proceeding.
This petition has been created by Victor M. and may not represent the views of the Avaaz community.
x

JAYAPURA (Papua, Indonesia), July 15 (Bernama)—The Jayapura branch of the Alliance of Independent Journalists (AJI) has said foreign journalists have found difficulties in getting permit to perform their journalistic duties in Papua.

Chairman of the Jayapura - West Papua branch of AJI Victor Mambor said here on Monday foreign journalists such as from New Zealand, the Netherlands, Britain and Australia had to wait for three months to get the permit to enter Papua.

“Even after they get into Papua some of them have to be accompanied by a government agent in doing their journalistic duty,” Victor told Indonesia’s Antara news agency.

Victor said AJI criticised the restriction saying the government is not clear in its policy regarding freedom of the press in Papua.

“So far there has been no government regulation restricting foreign journalists from doing journalistic work in Papua,” he said.

However, foreign journalists have complained they had been restricted by making it difficult for them to get the permit to enter Papua, he said.

He said the government had deliberately created a condition of no clear regulation that the authorities could interpreted it any way they wanted.

Such policy could degrade the Indonesian rating in the World`s Press Freedom Index, he said.

“AJI has not seen positive reaction from the government to demand of international community for greater access by foreign journalists to Papua,” he added.

However, the journalists were not given freedom to perform their duties in Papua, he said.

“Seven of the foreign journalists were deported from Papua and most recently an ABC reporter had to be disguised as tourist to enter Papua,” he said.

Victor said Marty pledged to see to the case of journalists being barred from entering Papua, but foreign journalists had continued to face restrictions.

Today: Victor M. is counting on you