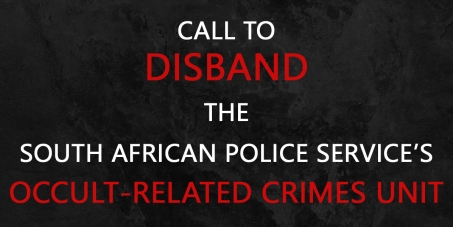 By continuing you agree to receive Avaaz emails. Our Privacy Policy will protect your data and explains how it can be used. You can unsubscribe at any time. If you are under 13 years of age in the USA or under 16 in the rest of the world, please get consent from a parent or guardian before proceeding.
This petition has been created by Bronwyn K. and may not represent the views of the Avaaz community.
x

Sign this petition
Bronwyn K.
started this petition to
Police Minister, Mr Nkosinathi Emmanuel Mthethwa, National Police Commissioner, Ms Manhwashi Victoria Phiyega, Parliament
Founded at the behest of Kobus Jonker (now retired) in 1992, the South African Police Service’s (SAPS) Occult Related Crime Unit (ORCU) was founded to combat alleged crimes of Satanism and membership to the Unit is restricted to Christian detectives only. Highly active during the 1990’s, the ORCU’s motivation was based on myths and falsehoods regarding Pagan, Satanic, occult and New Age beliefs and practices ; myths which were subsequently investigated by the FBI in the USA in 1992 and found to be false .

During its history the ORCU succeeded in only a handful of convictions and in distributing false information on minority religions , contributing to South Africa’s own ‘Satanic Panic’. Due to complaints from the public that the ORCU’s activities infringed on the constitutional right to freedom of religion , it was widely reported in the media that the ORCU was disbanded; and even according to various government departments, the ORCU was disbanded .

However, according to a leaked SAPS memo in 2012 , the SAPS intended on training new detectives for the ORCU. Detectives would be tasked with the investigation of “spiritual intimidation, including astral coercion,” “poltergeist phenomena,” and “allegations of rape by a tokoloshe spirit”, amongst many other dubious areas of investigation. At the time the public was led to believe that this would be a resurrection of the once disbanded ORCU, but this was not the case.

In a recent media statement, Attie Lamprecht, head of the ORCU, disclosed that despite media reports and government knowledge, the ORCU was never disbanded- it merely continued working underground out of public view . This would mean that the ORCU has deceived not only the general public, but government departments too, in order to continue their unconstitutional, religiously-motivated agenda that makes use of state resources and is funded by taxpayer’s money.

The South African Constitution guarantees each citizen the right to freedom of religion (including the freedom to not follow any religion) free from discrimination . The ORCU promotes prejudice against minority religions in direct contravention of the Bill of Rights and the SAPS’s Code of Ethics and Code of Conduct . Additionally, allowing the existence of an Occult-related Crime Unit that is only open to Christian detectives, and based on prejudicial Christian views, blurs the lines between church and state in what is meant to be a secular model of governance.

For these reasons we call on Police Minister, Mr Nkosinathi Emmanuel Mthethwa, and National Police Commissioner, Ms Manhwashi Victoria Phiyega, to uphold the Constitution they have sworn to protect by once and for all disbanding the Occult-related Crime Unit and to cease training detectives in ‘occult-related crime’ with training material that is false and discriminatory against minority religions.

At the end of the day the power is in the hands of us, the taxpaying citizens, to ensure that government officials and institutions uphold the Bill of Rights and not waste our hard-earned money on irrelevant and discriminatory SAPS units such as the Occult-related Crime Unit. Exercise your rights and voice, and sign the petition now.

References:
1. “SAPS members who want to serve in this Unit must acknowledge the supernatural world. They must strongly believe in Jesus Christ, because Satanism’s main enemy is Jesus Christ.” Servamus Special Community Edition: Drugs & Occult-Related Crime, the facts, the answers. Page 73.
2. Servamus Special Community Edition: Drugs & Occult-Related Crime, the facts, the answers. Breaking the Circle, page 90
3. http://www.rickross.com/reference/satanism/satanism1.html, Kenneth V. Lanning, "Investigator's Guide to Allegations of 'Ritual' Child Abuse", Behavioral Science Unit, National Center for the Analysis of Violent Crime, Federal Bureau of Investigation, FBI Academy, Quantico, Virginia 22135 (1992)
4. http://web.archive.org/web/20060418044931/http://www.saps.gov.za/youth_desk/occult/occult.htm
5. http://mg.co.za/print.1999-03-19-devil-busters-to-go-bust. Mail & Guardian, Devil busters to go bust? 19 March 1999.
6. wwrn.org/articles/19589/?&place=south-africa&section=occult. The Australian, Black magic, murder and madness in Satanist South Africa, 21 November 2005.
7. “…the disbanded SAPS Occult-related Crime Unit” www.info.gov.za/speeches/2006/06103013451001.htm. Media statement on the release of the report of the Task Team on ritual murders in Limpopo. 26 Ocotber 2006
8. www.facebook.com/groups/paganrightsalliance/384115574992666/
9. Gatewaynews.co.za/2013/04/25/saps-occult-unit-was-never-disbanded-just-went-underground/. Gateway News, SAPS Occult Unit was never disbanded- just went underground, 25 April 2013
10. “Everyone has the right to freedom of conscience, religion, thought, belief and opinion.” www.info.gov.za/documents/constiution/1996/96cons2.htm#15. South African Bill of Rights, 1996
11. “Respect for diversity- Application: Employees of the SAPS acknowledge the diversity of the people of our country and treat every person with equal respect. Explanation: In performing our duties, we will always show respect for the cultural and other diversities in the community. We will treat every person with equal respect and honour their rights as inhabitants of South Africa. We will not unlawfully discriminate against any person.” http://www.saps.gov.za/saps_profile/code_of_ethics/code_of_ethics.htm
12. http://www.saps.gov.za/saps_profile/code_of_conduct/code_of_conduct.htm

Today: Bronwyn K. is counting on you