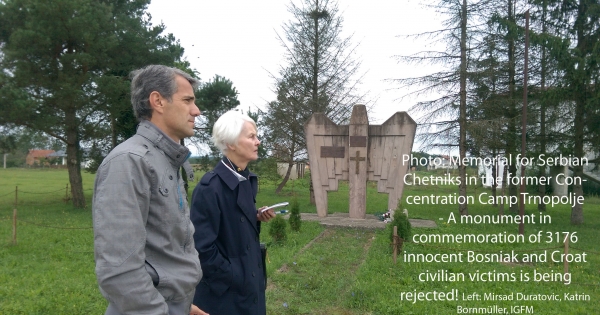 By continuing you agree to receive Avaaz emails. Our Privacy Policy will protect your data and explains how it can be used. You can unsubscribe at any time. If you are under 13 years of age in the USA or under 16 in the rest of the world, please get consent from a parent or guardian before proceeding.
This petition has been created by IGFM E. and may not represent the views of the Avaaz community.
x

The erection of a monument in commemoration of the 3176 innocent civilian victimsfrom Prijedor and the surrounding area, including 102 children and 256 women, as a symbol of peace and reconciliation and of prevention of future genocide.

Serbian forces committed ethnic cleansing (i.e. genocide) throughout Bosnia and Herzegovina, as well as in and around Prijedor, from 1992 to 1995. Victims were Bosnian Muslims and members of other communities living among them, such as Croats and Roma.

In order to establish an ‘ethnically-pure Greater Serbia’, they murdered thousands of prisoners in concentration camps like Omarska, Manjaca, Keraterm, and Trnopolje.

Massacres and mass executions, systematic arrest and murder of members of the academic and political elite, and rape of Bosnian Muslim and Croatian women inside and outside of the rape camps - these were the headlines from Prijedor in 1992.

The memories of the horrific crimes that took place in the concentration camps of Omarska, Keraterm, and Trnopolje (in which the police from Prijedor were heavily involved) are still very much alive in us, the survivors. We want the victims to be properly buried. Even today, mass graves are searched for missing bodies. For us, the survivors, it is very important to set up a memorial site. However, in our efforts to further important remembrance and awareness work, we continue to facediscrimination and constantly encounter resistance. The reason for this is: The perpetrators of that period of time are still in the administration and in the police in Prijedor; they strongly oppose and fight against the construction of a memorial.

We ask the High Representative Mr. Valentin Inzko and the German Chancellor Dr. Angela Merkel to advocate for a memorial for the lives of innocent civilians.

Today: IGFM E. is counting on you