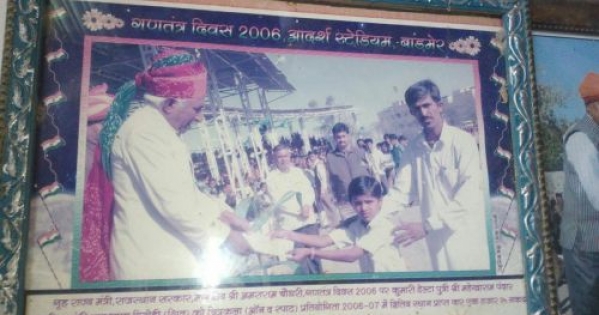 Sign this petition
Kamayani M.
started this petition to
Chief Minister Rajasthan
Delta was a 17 years old Dalit girl from a village near the Pakistan border in Barmer district of Rajasthan. She was persuading her BSTC (a course afert 10+2, to become a school teacher) from Jain Adarsh teacher training institute for girls in Nokha, Bikaner (Rajasthan).

She was a brilliant student and an amazing painter, having topped in an Art competition in whole of Rajasthan when she was in 12th standard. One of her artwork was featured in an art magazine published by Rajasthan secretariat in 2006, when she was just 7 years old.

On the morning of March 29, her dead body was found in the water tank of her hostel under suspicious conditions. Police took her body in a municipal garbage carrying vehicle (tractor) without videographing it. According to institution, she committed suicide because they caught her in PT teacher Vijendra Kumar’s room, and they had warned both and asked them to write an apology.Now the question is, why did the Institution not inform her parents? Why did the Institute not sack the PT teacher and file a complaint against him as she was a minor?

According to the FIR filed by her parents, there were only 4 girls at the hostel as all the other girls had gone home and had not returned by then. She came back along with her father on the morning of 28th. Later in the evening, at 8 pm, she called her father and said that their Warden Priya Shukla had sent her to the PT Instructor’s room, to be his helper, with the excuse of cleaning the hostel. There she was raped by him. She seemed very scared while narrating the incident, according to her parents. When her parents got all the information of this incident, the Institute took written apology from both her and the PT Instructor with a statement that this happened with mutual consent.

While her parents say that this is murder, as the institute neither sacked the PT Instructor nor informed them, being ignorant of the fact that she was a minor. According to them, to downplay the incident, the Institute murdered her as they are very influential people.