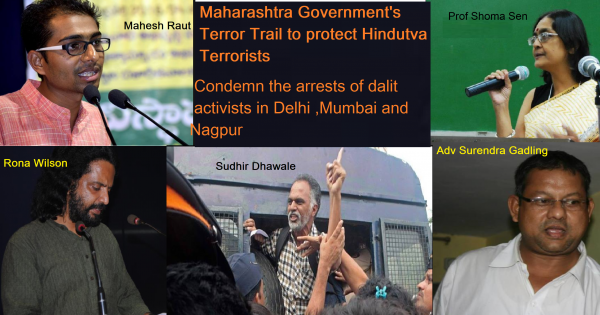 Sign this petition
Kamayani M.
started this petition to
Chief Minister
Today, on 6th June 2018 at 6 am in the morning, Professor Shoma Sen, Advocate Surendra Gadling, cultural activist Sudhir Dhawale, human rights activist Rona Wilson and anti-displacement activist Mahesh Raut were arrested from different locations in Nagpur and Delhi by the Maharashtra police. Professor Shoma Sen, Head of English Department in Nagpur University and member of Women against Sexual Violence and State Repression (WSS), Advocate Surendra Gadling, General Secretary of Indian Association of Peoples’ Lawyers (IAPL), Sudhir Dhawale, editor of the Marathi magazine Vidrohi and a founding member of the Republican Panthers, Rona Wilson, human rights activist and Secretary of Committee for the Release of Political Prisoners (CRPP) and Mahesh Raut, anti-displacement activist based out of Gadchiroli are reportedly arrested in connection with the Bhima-Koregaon riots that took place in January 2018. These arrests follow intense harassment of these activists; and many of them had their houses raided earlier this year in April by the Maharashtra police along with raids at the homes of Kabir Kala Manch (KKM) activists Rupali Jadhav, Jyoti Jagtap, Ramesh Gaichor, Sagar Gorkhe, Dhawala Dhengale in Pune and Republican Panther activist Harshali Potdar.