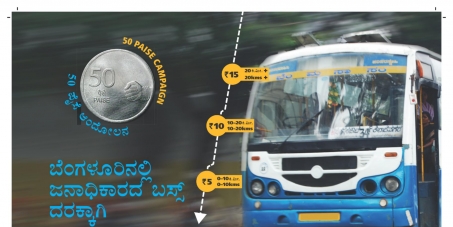 By continuing you agree to receive Avaaz emails. Our Privacy Policy will protect your data and explains how it can be used. You can unsubscribe at any time. If you are under 13 years of age in the USA or under 16 in the rest of the world, please get consent from a parent or guardian before proceeding.
This petition has been created by Bangalore B. and may not represent the views of the Avaaz community.
x

There have been three bus fare increases in Bangalore in the last year and a half, with fares shooting up by almost 50%. Fares were raised steeply in October 2012 and in June 2013. Again in February 2014, fares for the second stage was raised by Re 1.

Moreover, the high monthly pass rates are practically unaffordable for people with low incomes. As a result, many purchase only day passes, which almost doubles their financial burden.

Lakhs of Bangaloreans earn less than Rs 5,000 per month. The present bus fare structure therefore compels them to shell out anything between a quarter to a fifth of their salary on transport, leaving little for food, housing, health-care, clothing, education and the care of children and the elderly, not to mention other major expenses.

However, BMTC continues to hike its fares, citing profitability and rising diesel prices as an excuse. Public transport is a public utility and the right to mobility is a human right. It is unacceptable that this human right be made subservient to profitability. When we don’t run services such as sanitation and law and order on a profit-and-loss basis, it defies logic to expect BMTC to run on profits. Most cities around the world regard public transport as a public service, and across the world there are cities that are introducing free public transport.
BMTC also has one of the highest fare structures among state-run public transport corporations in the country. A comparison is given below:

Both the Karnataka government and the Union government have set aside massive funds for other transport infrastructures such as airports and the metro. It is absurd that Rs. 40,000 crores is given to the Metro whereas the BMTC which carries about 50 lakh commuters, or six times as many as the Metro, should get a mere Rs. 100 crores from the state annually towards running costs. When the government gives huge tax exemptions to corporates, why can’t it waive taxes on diesel, VAT, Motor Vehicle Tax etc and give BMTC more support? This, along with fixing administrative inefficiencies, is urgently needed for the network to better serve Bangaloreans so that they can participate in civic and economic life as truly empowered citizens.

BMTC is already under loss, so how can they reduce fares? BMTC cannot reduce fares on their own, hence we want the state government to support BMTC. They can do so in the following ways

· State Government can pay for the BMTC employee salaries as is being done in other states, such as Tamil Nadu.

We want a fare structure, in which passengers would pay Rs. 5 for the first ten kilometres, Rs. 10 for any distance ten to twenty kilometres, and Rs. 15 for any distance above twenty kilometres.This fare structure means that passengers have to pay 50 paise per kilometre. A daily pass should be for Rs. 25, and a monthly pass should be for Rs. 250, which is 5% of the government-mandated minimum wage. Those earning below the minimum wage should be given free bus passes. We believe this is logical and feasible, and we urge the government to establish a participatory process of fare –fixation which takes into account the needs of BMTC’s largest stakeholders, namely, the people of Bangalore. No one should have to pay more than 50 Paise per kilometre for travelling by BMTC.

Sign this petition to tell BMTC and the State Government that we demand an affordable and accessible public transport system.