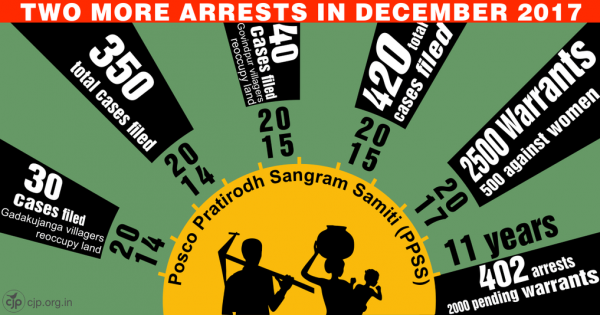 Sign this petition
Citizens F.
started this petition to
CM Odisha
CJP is focussing its resources in helping Human Rights Defenders (HRDs) being targeted with false cases for fighting from the ground, to negotiate the Indian legal system and continue the good fight. Battling False and Mala‐fide cases in the Courts is a Special Focus Action Area of CJP. CJP has been following up the developments in the movement against the multinational giant POSCO and did a detailed story and timeline of events which can be seen here (https&colon//cjp.org.in/posco‐to‐jsw‐timeline/). However, the December of 2017 saw an intensification in repression through the escalation in the number of false cases and looming threats of impending arrests. In view of this, we are writing a letter to the Chief Minister of Odisha demanding the quashing of the false FIRs on innocent Adivasis and villagers in the Paradip region of Odisha. Apart from the CJP itself, Justices BG Kolse Patil (retired judge Bombay High Court) and Justice PB Sawant (retired judge Supreme Court of India) are also signatories to this letter. Now we need your support&excl Please join us in this fight in restoring the rights of the indigenous people to their land and forests and a life free of fear.

Subject&colon Appeal to quash all false cases registered on villagers in Paradip region, Odisha throughout the twelve years of the POSCO movement

Dear Sir,
We, on behalf of the Citizens for Justice and Peace (CJP), a civil rights organisation, would like to draw your attention to an urgent and pressing matter. Apart from the CJP itself, Justice BG Kolse Patil (retired judge Bombay High Court) and Justice PB Sawant (retired judge Supreme Court of India) are also signatories to this urgent communication.

We have received a communication on January 1, 2018 from Mr. Prashant Paikray on behalf of the Posco Pratirodh Sangharsh Samiti (PPSS) outlining a frightening picture of hounding of Adivasi villagers in the month of December. All those who are being targeted appear to have been active in resisting the grant of rich and fertile land to the Korean company, POSCO.

The letter states that on December 19, 2017 the police arrested two villagers, Mr. Judhistira Jena, age 60 years and Mr. Babula Samal age 45 years, both residents of Dhinkia village, Jagatsinghapur district, Odisha. The details of the cases charged on the villagers are given in the letter may be read at https&colon//cjp.org.in/join&dashcjps&dashcampaign&dashto&dashquash&dashfalse&dashcases&dashagainst&dashadivasis&dashin&dashodisha .

Apart from the latest arrest of these two villagers, there are other challenges that the locals of the area are facing. Throughout the course of twelve years of the movement against POSCO, the villagers in the impacted areas were embroiled in several allegedly fabricated and false cases. Several of these activists have multiple cases against them which seem completely illogical to us.

For example, one of their women leaders, Manorama Kathua from Dhinkia villageis is charged with a rape case. Similarly, many activists have been charged with Section 498A, the criminal provision of the Domestic Violence Act, 2005, in domestic feuds of other families of other households. Due to lack of resources they have not been able to provide a complete defence to all the activists and villagers.

However, in the 10 cases related to charges of section 420 (cheating) filed so far, in which local lawyers have provided defence, these have all resulted in acquittals. This strengthens our belief that it is likely that a large number of these cases are false cases.

Further, as mentioned in the letter annexed to our appeal, the PPSS has struggled to provide a defence for a total of 420 individuals. In addition, warrants have been issued against 1500 people, including 500 women. Of these, approximately 400 of these individuals were, in fact, arrested. About 400 cases have been registered against 2500 people who face the permanent risk of getting arrested at anytime.

Because of the threat of these looming arrests, the villagers are not able to pursue their everyday livelihood options like beetle cultivation. It is an attack on both their life and liberty. They are unable to access even basic services like medical facilities in situations of emergency.

You are aware, Sir, that the multinational giant, POSCO withdrew from the state of Odisha in March 2017 owing to the large scale public protests of the people of Odisha. Besides, in accordance with the Forest Rights Act, 2006, the rights of the forest dwelling communities need to be restored. And yet, despite the withdrawal of POSCO, the false cases that were charged to control the protests still remain intact, becoming a source of continued harassment. We urge you to urgently intervene and quash all of these.

This is the basis of our strong appeal to you, Sir to urgently look into the matter and quash all the false cases registered against the people of the Paradip region‐ the region that has been at the centre of the agitation against multinational giant, POSCO. The land here is fertile, the people are your people, the people of Odisha and they need your urgent protection and intervention.

We urge an immediate and comprehensive intervention.