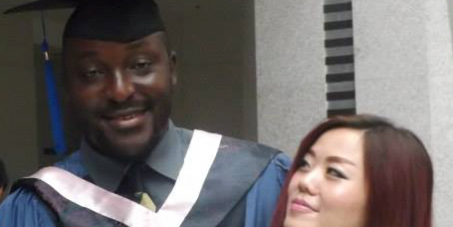 This petition is closed
50 Supporters
Narjisse O.
started this petition to
Chongqing Municipal Police
UPDATE: SUCCESS!!! The case against Gerald has been dropped and his passport returned! Thank you to all who supported him.

When an African student and his girlfriend were attacked by a group of racists, in China, he was arrested by the same police that they called to their defence . Furthermore he's not had any evidence released to him or his embassy and no action is being taken against his attackers .

Gerald Allah-Ompolo is the Congolese son of a doctor and customs official from Brazzaville. When he was at school he enjoyed literature and had dreams of being a judge. He studied Law in Brazzaville, before moving to China 7 years ago, to study to be a legal translator. He first went to Beijing and fell in love with the country, before deciding he wanted to study in a place with fewer foreigners, so he could get a deeper understanding of China. 4 years ago he moved to Chongqing in China, where he was drawn to the local culture, a year later he met his girlfriend and things have been going very well, excepting an incident on 17th August 2014.


Gerald and his girlfriend had been out in the centre of Chongqing, Jiefangbei, on an evening and were approached by a hostile group of 7 people (4 males and 3 females). The group were upset that his girlfriend is Chinese and that he is black, and started to verbally abuse the two of them with xenophobic and racist abuse . His girlfriend verbally defended them both by saying “he is black, but he is still a person” and as a result was physically attacked by the group. She was firstly punched by one of the male attackers and then grabbed by the throat by another male . Gerald tried to pull the attackers off his girlfriend and was assaulted in the process, but was successful in putting himself between her and the attackers. He managed to shield his girlfriend as she tried to flee through a door next to where the incident took place, but was struck repeatedly on the back by what he believed to be a metal object, unfortunately she couldn’t find an escape route through the building and was forced to again exit the same door she had previously entered, where they were both attacked again by the group.

During the second phase of the attack there were two people assaulting Gerald and his girlfriend, while another two people tried to separate the attackers from the couple. This time, Gerald was able to help his girlfriend escape and she went to retrieve the police for assistance . Whilst this was happening a bystander decided to involve himself in the attack as one of the original attackers went to fetch a bottle to use as a weapon. Whilst being held by one attacker and repeatedly struck by another, Gerald saw the third approaching, with the bottle in his hand, and struck one of the attackers with a single blow, in self-defence . This is after he had sustained countless blows to his body, from multiple directions.

The police arrived on the scene, shortly after. Gerald went to the police station to give a statement on his attack, along with the attackers. After giving his statement he was asked to stay in a holding area, while the police took statements from the attackers. Gerald was shocked to find that he was arrested after his wait. He was held in detention for 2 weeks without understanding the charges, until the Congolese Embassy became involved in the incident, paying the 30,000RMB (approximately $4,800) bail that had been set by the police. It was at this point that he was told that the attacker he struck had needed hospital treatment following the single blow Gerald had thrown.

Following his release Gerald has said that his life has turned into a living hell . His university classes have been suspended, where he has been studying for his Masters, he is unable to work and so has no money available, subsequently he has had to vacate his apartment as he cannot pay the rent , all of which is compounded by the fact he cannot leave the country as his passport has been confiscated by the police.

This may already sound like particularly unfair treatment, but the story takes a turn for the worse. After his release Gerald set about trying to vindicate himself, by trying to recover CCTV footage from the 4 security cameras that captured the incident. He was told by the local security that the police had come to collect footage from 3 cameras, but no footage has been shown to him from them . A local bar had a camera that captured footage from around 20 meters away, showing the attackers grabbing his girlfriend by the throat and striking her, along with the blow that Gerald struck his attackers with, which Gerald was able to view at the police station, but which hasn’t been released to him or his embassy , despite request from both to do so. Although the security company stated they released other footage to the police, when questioned they have said that there is no other footage. The matter has now been handed over to the court to handle the matter.

Gerald has been told that he will have to appear in court on the 19th of May, to face his attackers , who are demanding 700,000RMB (around $112,000) in damages for the incident and have refused Gerald’s requests to meet with them to negotiate the case. The damages are supposed to cover the expenses and lost earnings of the attacker that was struck by Gerald, but he has been given neither receipts nor evidence to corroborate the amount that they have arrived at. Gerald has been made to feel even more suspicious of the amount that is being demanded as it includes a figure of 15,000RMB (more than $2,400) for transport, in a city where a taxi ride from one end of the city to the other costs around 30RMB, which would account for almost 9 months of travelling every day from one edge of the city to the other. The amount in damages is the equivalent of 2 houses in the city and he says he has no means of paying it , either through his own finances (which have been exhausted), his government or family.

The incident is difficult to be looked at in isolation with Chongqing having less than 0.1% foreign residents, with few but the very newest arrivals not knowing of a fellow foreigner who has been attacked, with skin tone seeming to play a factor in the incidence and intensity of the hostilities in question. Around a month prior to the racist attack on Gerald another African resident of Chongqing was set-upon by a group of Chinese attackers. George Ambe , from Cameroon was a singer and DJ in a club in Chongqing. After performing one night in June last year, he was approached by a girl, who asked to take a photo with him, to which he obliged. When the girl posted the picture on the Chinese social media app Weixin (Wechat) her boyfriend became incensed and went about tracking down George. On an evening during the World Cup, whilst out watching a match with friends, the boyfriend of the girl who photographed him and 9 others entered the bar where George was watching a game. George tried to escape the attack, but despite running from his attackers, he was pursued and stabbed in the street outside the bar, dying at the scene from his injuries. His body was left exposed in the street by the police, being photographed by onlookers who hadn’t intervened in the attack and spread images of his prostrate body on the same social media that had led to his attackers ire and ability to track him down. George’s wife and daughter are still living in Chongqing, but were not offered any compensation by the 3 attackers, who had come forward in relation to the murder of their husband and father.

These two, potentially, racially motivated events, with the suspicion of police impropriety in the handling of evidence suggest a degree of bias if not racism in the institutions along with the local community. Occasionally stories break on social media, but still reporting them outside the country can be a risky prospect for foreigners and Chinese alike, with large scale surveillance on social media making the risk of discovery even greater.

Many of the African and African American community in Chongqing are ambivalent and have chosen to hide away, which has been more the approach that Gerald has taken since his incident. However, there are many in the local community that have taken to social media to report his plight and gain media attention. In the last week his case has been so widespread across social media that journalists from Africa, France and America are trying to interview him and gain further insight into the case. Gerald has said that he only wants the police to release to him, his lawyer or his embassy, the evidence that is being used to incriminate him and should also be able to exonerate him , along with any evidence that would corroborate the figure of compensation sought, alongside a commitment to take action against the perpetrators of the attack against the couple. A large proportion of the foreign community in Chongqing will be going to the court on the 19th May to offer support to Gerald, a much loved member of the local football team, the foreign and local community alike.

UPDATE: Gerald has been informed that his trial date has been put back to June 2nd , giving more time for the release of the evidence to take place. This is good news . Please continue to support this petition and Gerald's pursuit of justice by sharing and signing.

Today: Narjisse O. is counting on you