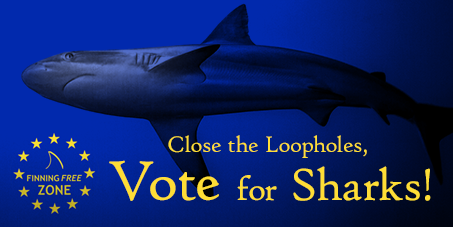 Every year, tens of millions of sharks have their fins hacked from their writhing bodies, left to drown slowly at sea -- all for a bowl of soup. Today, Europe is the world’s largest shark fin exporter -- thanks to an industry-backed legal loophole that gives them an open licence to slaughter. But now we have a chance to stop this cruel practice in the EU.

The EU Parliament is about to vote on a law to finally end this appalling practice -- but a Portuguese representative tied to the fishing industry is leading a slippery charge to kill this shark rescue. Only our scrutiny can ensure she is defeated.

Let’s show Portuguese MEP Maria do Céu Patrão Neves the European Parliament has teeth too! Sign this petition now and share with everyone!

As a Chinese Malaysian who now lives in Germany, I grew up with shark fin soup at family weddings and special celebrations. But when I started diving and saw the beauty of these magnificent creatures, I knew I had to act. I've done all I can to convince my friends and family to stop consuming shark fin soup -- and now we have a chance to stop the supply here in Europe.

Shark finning is the cruel practise of cutting off a shark's fins while he’s alive and discarding the rest of the carcass back into the sea, so that the ship can spare more space for as many fins as possible. The helpless shark will sink to the ground and die slowly in unimaginable torment. On the Hong Kong market, one fin out of three comes from our continent and it’s up to us to act. A bowl of shark fin soup sells for between $40 and $400. The shark fin trade is the second most lucrative traffic in the world after drug trafficking.

More than 100 million sharks are caught annually worldwide according to official figures, 73 million for the trade in shark fins alone, i.e. 200,000 per day. If they disappear, the ecosystem will collapse and the consequences on the oceans’ health will be massive and irreversible. Currently, one third of shark species are classified from "vulnerable" to "critically endangered" on the International Union for Conservation of Nature (IUCN) red list.

Since 2003 a law has prohibited finning in Europe, but due to a loophole special permits have been granted that allow fisheries to circumvent the ban, which makes the whole law nothing but a pathetic lie.

The solution to prevent finning is to make sure existing loopholes are removed from the laws and sharks are landed with their fins naturally attached to their body – without exception.

This won’t stop the killing of sharks but as a first step on a long journey it will slow down the killing rate and reduce the cruelty towards killed sharks.

There is an initiative of members of the Fisheries Committee to adjust the current law to remove the loopholes. Unfortunately there is still opposition from a member of the European Parliament (Portugal), Maria do Céu Patrão Neves, who used her role as rapporteur to fight for preserving the special permission loopholes. The European Parliament Fisheries Committee will vote on the amendments in September and afterwards submit to a vote in plenary in October 2012.

Ask MEPs to vote for the proposed stricter law, sharks to be landed with their fins naturally attached, closing the loopholes – with no exceptions!

Europe can make a significant difference by setting a limit to the slaughter, and therefore acting in favour of the marine ecosystem’s stability and respectful behavior towards animals.