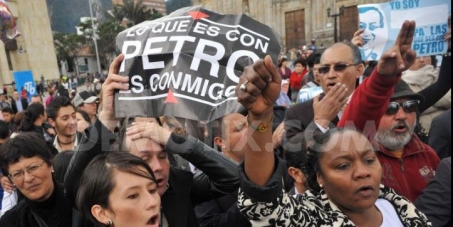 By continuing you agree to receive Avaaz emails. Our Privacy Policy will protect your data and explains how it can be used. You can unsubscribe at any time. If you are under 13 years of age in the USA or under 16 in the rest of the world, please get consent from a parent or guardian before proceeding.
This petition has been created by Common . and may not represent the views of the Avaaz community.
x

We stand in solidarity with the mayor of Bogota, Colombia’s Gustavo Petro who was ousted from office on December 9, 2013. His removal stems from alleged mismanagement of garbage collection in a showdown with private garbage collectors spearheaded back in December 2012. Mr. Petro has stated that he was removed from office for having "de-privatised a public service".

According to Colombia’s Inspector-General, Alejandro Ordóñez who alleges Mr. Petro violated the principles of the free market and endangering people's health. The reasons outlined by the Inspector-General in justifying the ruling serve the particular interests of private companies who wish to maintain control of the solid waste management system from which they generate considerable profit. Mr. Ordóñez has already acted against progressive politicians in Colombia; in 2010 he ousted Senator Piedad Cordoba, a Nobel Peace Prize candidate and member of congress for more than 6 years.

Mr. Petro was elected in 2012 and his term was suppose to end in 2016. As a senator, he investigated the influence of far-right militias in Colombian politics uncovering a scandal in 2006 that has led to criminal conspiracy convictions of dozens of politicians.
We join with the more than 30,000 Colombians who gathered in the Plaza de Bolívar in the center of Bogota to support Mr. Petro and calling for him to be reinstated.

The removal of an elected official is extremely concerning and something that even the Justice Minister, Alfonso Gomez Mendez has said needs to be revised.

We call on the inspector general’s office of Alejandro Ordóñez to reverse its decision to remove a democratically elected Mayor and banning him from undertaking any public office for the next 15 years. We also ask President Juan Manuel Santos to evaluate the impact of this decision on the democracy and peace in Colombia.