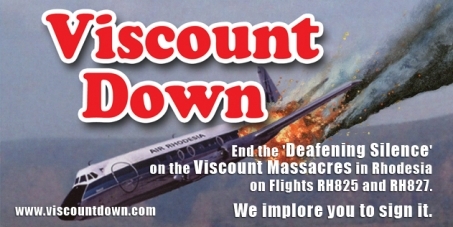 By continuing you agree to receive Avaaz emails. Our Privacy Policy will protect your data and explains how it can be used. You can unsubscribe at any time. If you are under 13 years of age in the USA or under 16 in the rest of the world, please get consent from a parent or guardian before proceeding.
This petition has been created by Team V. and may not represent the views of the Avaaz community.
x

Terrorism is Terrorism...And yet...There's an ongoing failure by Governments to condemn these atrocities.A scheduled passenger flight, RH825 with just civilians on board, was deliberately shot down by Communist-backed terrorists on 3 September 1978 - and then, 5 months later, in February 1979, another passenger airliner, RH827, another civilian flight, in an almost identical cowardly attack on innocents...by ZIPRA

There was a “Deafening Silence” from the US government and the United Nations!

This was highlighted in a sermon by the late Very Reverend John da Costa known as The Deafening Silence. You can download a recording of his sermon at Viscountdown.com

This was an act of terrorism - and it is compounded by the moral cowardice shown by successive governments who fail to acknowledge this.

We want the world to know and people to deplore the failure of their Governments to articulate this, even to this day!

We commend the work done by Keith Nell and his Viscount Down Team to ensure that these atrocities are not forgotten. See more at Viscountdown.com