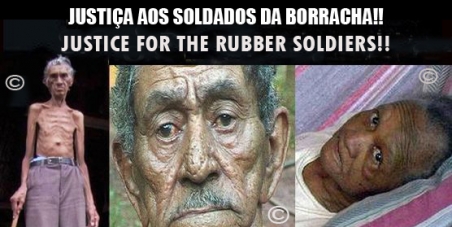 JUSTICE FOR THE RUBBER SOLDIERS !!

By continuing you agree to receive Avaaz emails. Our Privacy Policy will protect your data and explains how it can be used. You can unsubscribe at any time. If you are under 13 years of age in the USA or under 16 in the rest of the world, please get consent from a parent or guardian before proceeding.
This petition has been created by Paul M. and may not represent the views of the Avaaz community.
x

Sign this petition
Paul M.
started this petition to
Congresso brasileiro/Dilma Rouseff
LETTER TO THE GOVERNMENT:

The most serious threat to a nation's pride and reputation is when a country fails to honor its soldiers or citizens by not recognizing their contribution and service during wartime. The Rubber Soldiers of Brazil had an undeniably important contribution in World War II. They served Brazil and the world when they were required to do so. This fact must no longer be ignored and forgotten. It has been over 70 years since the war ended, and the surviving Rubber Soldiers are still without their proper pension and recognition as war veterans.

We urge the present Brazilian government/Congress, to do what past governments have left undone, and clear this shadow in history, by URGENTLY honoring the Rubber Soldiers with their earned and rightful compensation as war veterans.

The promise made to them was that they were part of Brazil's war effort in support of its allies. Indeed, nearly 30,000 Rubber Soldiers died, giving their lives extracting latex for the war. The surviving Rubber Soldiers are today, just a shadow of the young, strong and brave men they used to be when the government recruited them. They are paralyzed and debilitated, dying in hospitals beds and struggling, without the strength to come to you to plead for justice. They don't have much hope left in them. They have fought a war, but have lost this battle. This neglect of the Rubber Soldiers has resulted in a lifelong hardship for them and their families. Some authors have compared what was done to the Rubber Soldiers to the Holocaust. Some refer to it as slavery and as a violation of human rights.

What example will be set for the young and future generation of brave patriots, when they will be asked to serve? Won't they hesitate to serve a country that will abandon them?


We plead to the Brazilian government to stand up for these remarkable Rubber Soldiers, and honor them with their pension - in its totality - as well as the retroactive pay they are entitled to.

Today: Paul M. is counting on you