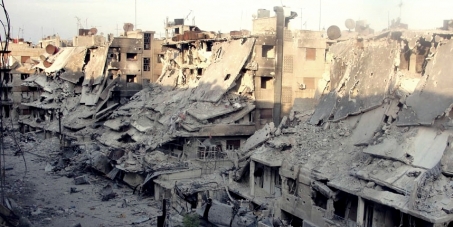 By continuing you agree to receive Avaaz emails. Our Privacy Policy will protect your data and explains how it can be used. You can unsubscribe at any time. If you are under 13 years of age in the USA or under 16 in the rest of the world, please get consent from a parent or guardian before proceeding.
This petition has been created by Dima F. and may not represent the views of the Avaaz community.
x

Sign this petition
Dima F.
started this petition to
David Cameron, PM, Philip Hammond, DM, Francois Hollande, P, Jean-Yves Le Drian, DM
Russia’s official arms exporter Rosoboronexport is the main supplier of weapons to Syrian dictator Bashar al-Assad. With well over 100 000 dead and counting, no solution to the Syrian conflict can be achieved without Russia, Assad’s main ally, being persuaded to stop the supply of Russian arms to a regime which uses them to target civilian areas.

Up to now Russia’s unconditional political and military support for the Syrian regime hasn’t wavered. However if Western governments put more pressure on Putin by boycotting Russian arms companies, Russia would pay a heavy price for continuing to back Bashar al-Assad.

The US recently boycotted Rosoboronexport following fierce criticism from campaigners and human rights groups. Yet for all their anti-Assad rhetoric, the British and French governments are still allowing Rosoboronexport to sell its weapons at arms fairs in London and Paris.

We therefore call on the UK and French governments to boycott Rosoboronexport until it stops supplying arms to Bashar al-Assad in order to show Russia that its decision to side with a war criminal is unacceptable.

Today: Dima F. is counting on you