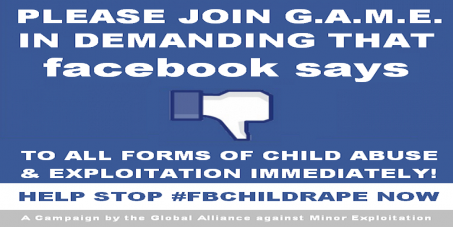 By continuing you agree to receive Avaaz emails. Our Privacy Policy will protect your data and explains how it can be used. You can unsubscribe at any time. If you are under 13 years of age in the USA or under 16 in the rest of the world, please get consent from a parent or guardian before proceeding.
This petition has been created by #OpScareCrow N. and may not represent the views of the Avaaz community.
x

Facebook provides several options for reporting offensive or harassing content, including spam, scams, graphic violence, hate speech, nudity, etc. Yet there is no recourse for someone wanting to report explicit child sexual abuse content or pedophiles and other kinds of sexual predators.

During mid March 2013 a video of severe and horrific child sexual abuse of a toddler girl went viral on Facebook, garnering more than 30,000 shares over a period of hours before it was finally deleted by Facebook following massive reporting.

Less severe forms of child exploitation material will be dealt with also in summary fashion and removed from Facebook permanently.

There should be NO delay between the very first report of such content and the time it takes for Facebook to act decisively to remove the content and user from public viewing, and preventing further sharing, downloading or continuing of abuse.

Furthermore, in cases of explicit child sexual abuse material or child exploitation content, a SINGLE report should immediately flag a page or profile for deactivation while being investigated.

The time has come for Facebook to live up to its goals of being a social network for the people. And those people include the minors over age of 13 that are also users of the network.

Lastly, Facebook has to acknowledge the rampant distribution and dissemination of child sexual abuse content hosted on it’s servers.

Such Category shall be according to following tiered system:

Includes CAM images, videos or links.
Copies of reports are directly linked to Law Enforcement.
One report will activate flagging of said content within 5 minutes of report.
Profile or Page will be immediately deactivated and held for law enforcement indefinitely.
A profile or page containing just ONE such image or video will be deactivated permanently.

Includes under-aged (-18) sexually-suggestive content.
Copies of reports are directly sent to IWF or NCMEC (others?).
Reporting flags a profile for immediate investigation and is temporarily deactivated on 3rd report received while Facebook investigation is underway.
If a profile is found to contain CEM, it is deactivated permanently but held for further LE investigation.
Severe cases are to be forwarded to Law Enforcement.

# Endangerment of Minor through Solicitation or Online Stalking

Report results in immediate flagging of a user account.
Professionally trained Facebook staff shall review the full account activity within 12 hours and deactivate said account or page within that time-frame if necessary.
If an adult profile is found to be actively stalking or attempting to solicit a minor, it is deactivated permanently but held for further LE investigation.
Law Enforcement is to be notified within 24 hours or report received.

# Cyber-stalking, harassment or bullying of a minor.

Profiles of minors have the ability to report a user for the above.
A single report will initiate an investigation by professionally trained staff.

Profiles of minors have the ability to flag and block any inappropriate content from their timelines or newsfeeds.
A single report on any post will effectively block all content from appearing anywhere on reporter's account.
10 Reports against any particular profile or page will initiate an investigation.

Links to appropriate civil organizations that may lend assistance in cases of emergencies, such as suicide prevention, anti-bullying, etc.

Today: #OpScareCrow N. is counting on you