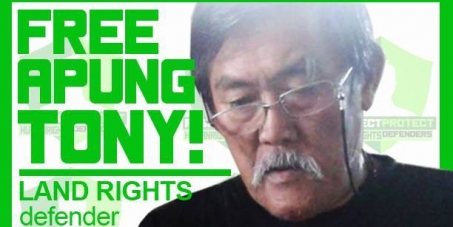 By continuing you agree to receive Avaaz emails. Our Privacy Policy will protect your data and explains how it can be used. You can unsubscribe at any time. If you are under 13 years of age in the USA or under 16 in the rest of the world, please get consent from a parent or guardian before proceeding.
This petition has been created by Jerbert B. and may not represent the views of the Avaaz community.
x

Sign this petition
Jerbert B.
started this petition to
Department of Justice Secretary Leila M. De Lima, Department of Interior and Local Government Secretary Mar Roxas
Apung Tony Tolentino, a barangay chairperson of Brgy. Hacienda Dolores, in Porac, Pampanga is accused of crimes. And what crime? He lead the fight with farmers in their right to land against private land developer, he defended and sacrificed for others who would not let the truth die with them. Apung Tony was arrested due to trumped up charges filed by private land developer and detained since April 16, 2014.

Apung Tony believes that all cases filed against him are mere forms of harassment. He emphasized that the only purpose of him being arrested is to weaken the farmers' resistance against land corporation.