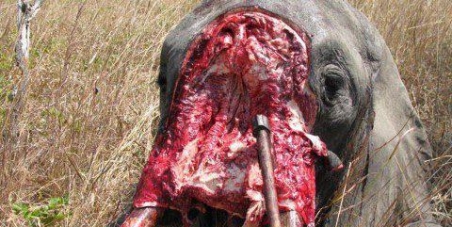 Destroy Blood Ivory by publicly burning it, and send a strong message as the leader of this Buddhist country

By continuing you agree to receive Avaaz emails. Our Privacy Policy will protect your data and explains how it can be used. You can unsubscribe at any time. If you are under 13 years of age in the USA or under 16 in the rest of the world, please get consent from a parent or guardian before proceeding.
This petition has been created by FEO S. and may not represent the views of the Avaaz community.
x

Sign this petition
FEO S.
started this petition to
Sri Lankan President his Excellency Mahinda Rajapaksa
In May 2012 Sri Lanka Customs seized a shipment of 359 elephant tusks en route to Dubai. The tusks which had been poached in Kenya were from the slaughter of more than 150 African elephants, with mothers and young being slaughtered and orphaned babies left to die of starvation. This is known as ‘Blood Ivory’ as it is extracted using extreme cruelty and directed entirely by human greed.

As a Buddhist nation Sri Lanka should be ashamed to add value to this Blood Ivory by gifting it to Buddhist temples as objects to be valued and venerated. As custodians of the greatest philosophy on ahimsa Buddhist monks across the nation should reject this Blood Ivory as it will stain the sacred grounds of their temples.

Further by gifting this Blood Ivory to temples the Sri Lankan government is legalizing this contraband. Thereby a precedent will be set allowing ivory to be acquired within the country. This will endanger all Sri Lankan tuskers by providing incentive for poaching in Sri Lanka, sounding the death knell for the last few tuskers left in Sri Lanka.

we hopes that the Presidential Secretariat and custodians of Buddhism will act with responsibility to both international regulations [Sri Lanka is a signatory to CITES since 1979] and up hold the dignity of our claim as the ‘Land of the Buddha’.

Today: FEO S. is counting on you

FEO S. needs your help with "Destroy Blood Ivory by publicly burning it, and send a strong message as the leader of this Buddhist country". Join FEO S. and 6,111 supporters today