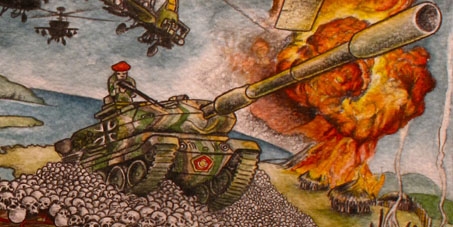 No tanks to Indonesia!

This petition is closed
3,945 Supporters
Markus H.
started this petition to
Wolfgang Schäuble, Thomas De Maiziere, Hans Peter Friedrich
In the western half of New Guinea (currently officially called the provinces Papua and West Papua), at least 300.000 people were killed by the Indonesian military and police since Indonesia took control of the region . Indonesia usually claims that killings and human rights abuses by security forces are a thing of the past.
But despite there is in fact no freedom of the press in the region, and most international journalists and human rights organizations are not allowed to work there, almost every day there are new reports about rape, torture and targeted killings of political activists.
Using armoured vehicles against demonstrators is common practice of the security forces. Those were used for example last year as the Third Papuan Peoples congress was broken up by brutal force and at least 3 people were killed by military and police.
But in the past month, not only demonstrators are attacked by security forces. Many of do not hesitate to kill Papuans that are in there way. No matter if it is about exploiting the natural resources of a region, raping someone´s daughter or just because of a disagreement about a reservation of a billiard table (no fiction).

Now Indonesia has announced to buy German tanks. Angela Merkel yet only said there is no official request, but didn't say a word how to answer the request if it will be made official in a few days. This makes it very likely she will agree to sell 130 tanks to Indonesia, an unstable nation where horrible crimes by security forces against civilians are the daily fare.

Today: Markus H. is counting on you

Markus H. needs your help with "No tanks to Indonesia!". Join Markus H. and 3,945 supporters today