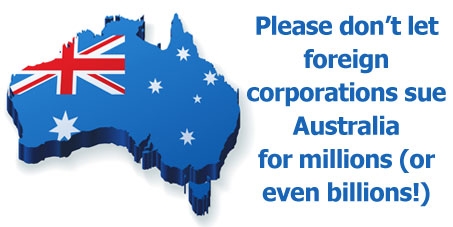 By continuing you agree to receive Avaaz emails. Our Privacy Policy will protect your data and explains how it can be used. You can unsubscribe at any time. If you are under 13 years of age in the USA or under 16 in the rest of the world, please get consent from a parent or guardian before proceeding.
This petition has been created by Tracey T. and may not represent the views of the Avaaz community.
x

Just a quick update to let you know the totally amazing news - on 5 March 2014 the Australian Greens introduced a bill into the Senate to Ban ISDS provisions in Australia, and they mention the petition!!!

Woooohooooo... Next step, getting the bill passed!


WHY THIS PETITION IS SO IMPORTANT

The decision by Prime Minister Abbott to reverse the blanket prohibition on ‘investor-state dispute settlement’ (ISDS) provisions in Australia’s upcoming trade negotiations has the potential to irreversibly damage Australia’s national interests by limiting Australia’s ability to set its own policies when it comes to health, the environment, social policies and more.

This is because this new policy will give foreign corporations the right to sue the Australian Government if they believe our policies will damage their corporate interests.

This means that biotechnology corporations could sue Tasmania and South Australia over their respective moratoriums / bans on Genetically Engineered (GE) crops. New South Wales could be sued over their environmental guidelines on coal seam gas extraction and any communities choosing to enact a moratorium on coal seam gas extraction could be sued as well. Pharmaceutical companies could sue Australia over our Pharmaceutical Benefit Scheme (PBS). We could also be sued if we ever wanted to ban harmful pesticides or institute stricter environmental standards in any area of our economy that might impact the interests of a foreign corporation. And that’s just to name a few…

And if you think this all sounds so totally outrageous that it couldn’t possibly happen to us here in Australia, then its well worth considering the impact of what ISDS provisions are currently doing in Canada - Quebec province had a US$250 million lawsuit launched against them after they called a moratorium on shale gas extraction (fracking) as they need time to assess the potential environmental impacts of fracking on their water supply. That’s not to mention the US$500 million case being bought against Canada under ISDS provisions by pharmaceutical company Eli Lilly over patent decisions made by the Canadian Federal Courts.

In fact, here in Australia even though tobacco companies lost their case on our plain packaging laws in the Australian High Court, one tobacco company – Philip Morris – is now suing Australia in an international tribunal using an ISDS provision that Australia signed with Hong Kong back in the 1990s.

While it’s bad enough that this change of policy by Prime Minister Abbott will potentially transfer millions (or possibly even billions!) of taxpayer dollars to foreign corporations through preposterous lawsuits, this is nothing compared to the total and irreversible loss of national sovereignty this policy would bring to Australia.


If you believe that Australians should get to choose their own policies and have their basic democratic rights honoured and protected, without fear of legal retribution by foreign corporations then please sign this petition!

About the petition author: Hi and thanks so much for checking out this petition. My name is Tracey Tipping and I am extremely passionate about all things eco, organic and natural! I run an online eco store - Eternal Source - and love researching and writing about chemical toxicity, organic products and other environmental issues. I moved to Tassie last year with my hubby and 2-year-old son in search of a cleaner, more natural and family friendly community to raise our family in.

Blog Post on Why I Started this Petition: http://www.eternalsource.com.au/blog/isds-provisions-just-say-no-australia/

Today: Tracey T. is counting on you